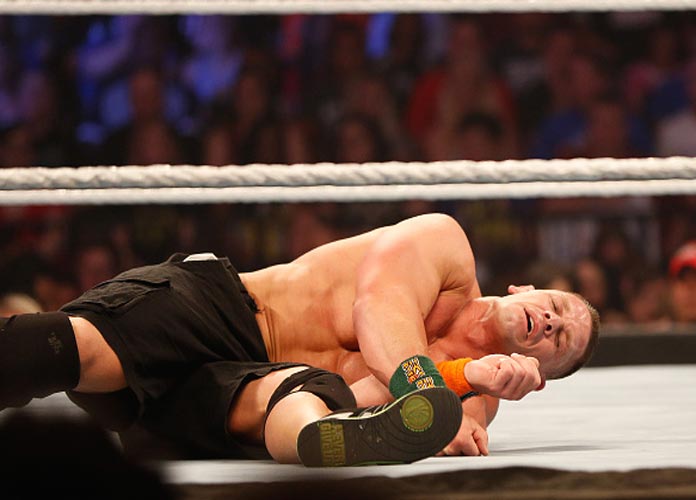 NEW YORK, NY - AUGUST 23: John Cena recovers from a blow during his fight against Seth Rollins at the WWE SummerSlam 2015 at Barclays Center of Brooklyn on August 23, 2015 in New York City. (Photo by JP Yim/Getty Images)

WWE SummerSlam 2016 took place at Barclays Center in Brooklyn, New York, in front of a sold out crowd Sunday night. The excitement of the fights weren’t as high as anticipated and the two-hour pre-show before the four-hour event made it hard for the show to keep pace and continue to entertain the fans. As fans entered Barclays Center during pre-show festivities, they bought t-shirts outside and took photos with their WWE championship belts, filled with enthusiasm, but as the show wore on some of that enthusiasm turned to boredom. If you didn’t pay the $120 to get inside, you didn’t miss anything. That being said there were some twists and new titles to be fought for as Finn Bálor became the first WWE universal champion.

The kickoff show featured American Alpha, Usos, and Hype Brothers vs. Breezango, Ascension and Vaudevillans, and Sami Zayn and Neville vs. The Dudley Boyz and Cesaro vs. Sheamus. Sheamus defeated Cesaro, Sami Zayn and Neville defeated The Dudley Boz, and American Alpha, Usos, and Hype Brothers defeated Breezango, Ascension and Vaudedillans all via pinfall.

Chris Jericho and Kevin Owens defeated Enzo Amore and Big Cass via pinfall. Enzo, the New Jersey native, and Cass, the Queens native entered the arena Enzo wore Yankees pinstripes and pictures of Notorious B.I.G. on his jacket. The two quoted Frank Sinatra lyrics talked about being from the New York, even though Enzo is from just across the river. According to CBS Sports Owens and Jericho used a Pop-up Codebreaker for the pinfall.

For the women’s championship Charlotte defeated Sasha Banks via pinfall. This fight looked a little amateur and scary as Banks nearly landed head-first in the ring and could have broken her neck. Banks maneuvered a top-rope Razor’s Edge by Charlotte into a hurricanrana and on the second lock in she was able to roll Banks over and keep her shoulders pinned for a three count to take the title as new women’s champ.

Nikki Bella, returned to the ring as a surprise and was hungry for a win. Bella had neck surgery seven months ago.

Bella, Natalya and Alexa Bliss defeated Carmella, Becky Lynch & Naomi via pinfall. Lynch took control of the ring at one point in the fight and cleared it, but that was as much as she would do the rest of the fight. Bella went one-on-one with Carmella, gave her a forearm and put her in a new age Rack Attack to finish the fight.

The main event saw Brock Lesnar defeat Randy Orton via TKO. Lensar was up early, he threw Orton into the announce table on two accounts. Orton looked limp and lifeless when Lesnar was setting him up on top of an announce table and suddenly Orton hit an RKO with a crazed look in his eye. Orton and Lesnar traded an RKO and F5 but neither resulted in a three count. Lesnar jumped on Orton and used his MMA fighting style to mercilessly punch Orton. Orton started bleeding from his head from all the jabs. The referee announced a decision for Lesnar by TKO after Orton was being tended to by doctors in the ring.

AJ Styles defeated John Cena via pinfall. Styles countered an Cena Attitude Adjustment into a Pele kick and the Styles Clash for the two count. Cena gave the AA for a two count of his own, Styles missed a springboard 450 off the top rope, Cena hit a flipping pin combination, Styles gave a German suplex that translated to a facebuster. A tornado DDT and top-rope leg drop by Cena did not give him the ‘W’. Styles hit a Frankensteiner from the corner and tried to finish with his Phenomenal Forearm finisher but no dice. Cena hit his AA from the middle rope but couldn’t keep Styles down for three. Styles finally converted an AA into a Styles Clash and Phenomenal Forearm for the three count.

The Universal championship featured Finn Bálor and Seth Rollins. Bálor won via pinfall but it was a back and forth fight with some classic maneuvers. Bálor missed three straight Coup de Grace attempts and on the third attempt Rollins switched it to a Pedigree but only got a two count. Rollins climbed to the top rope to eliminate Bálor, but he missed and Bálor dropkicked him into the corner. Rollins hit a superplex, but Balor reversed another Pedigree into a stomp and dropkick landing Rollins in the corner again and hit a Coup de Grace to win.

Jon Stewart took part in his second SummerSlam in a row. He was caught talking about RAW commissioner, Stephanie McMahon, in a backstage huddle that she confronted him on, of course and got in the ring later in the show and referenced how he leveled Cena with a chair.

NEW YORK, NY – AUGUST 23: John Cena recovers from a blow during his fight against Seth Rollins at the WWE SummerSlam 2015 at Barclays Center of Brooklyn on August 23, 2015 in New York City. (Photo by JP Yim/Getty Images)