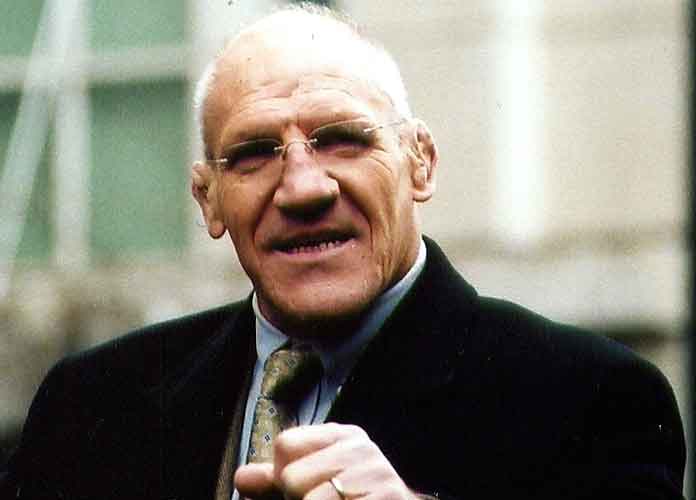 Although the exact cause of death remains unknown, Sammartino had been hospitalized for two months, according to several reports.

WWE is saddened to learn that WWE Hall of Famer Bruno Sammartino has passed away at age 82. https://t.co/B8nUabP0oh

Sammartino defeated Buddy Rogers at New York’s Madison Square Garden in May 1963 — competing in the then-World Wide Wrestling Federation — and from that point on began a record championship-win streak. His reign ended when he lost to Ivan Koloff in January 1971.

Sammartino retook his belt in December 1973 and went on a three-year undefeated run, one of the five-longest world championship reigns in pro wrestling history.

Known as “the Italian Superman,” Sammartino immigrated from Pizzoferrato, a town in central Italy, to Pittsburgh when he was just 15 years old.

Vincent McMahon, the chairman and CEO of WWE, called Sammartino “one of the finest men I knew, in life and in business” in a tweet on Wednesday afternoon.

Sammartino was inducted into the WWE Hall of Fame in 2013. Before this, he told ESPN of the honor in an interview.

“Being inducted into the Hall of Fame at Madison Square Gardens is the biggest thing in my life,” Sammartino told ESPN. “Anytime that people feel that you accomplished enough to enter into a Hall of Fame, of course this is a tremendous, tremendous thrill for me. I had a lot of my success due to appearing at the Garden.”

Sammartino revealed in some interviews the harsh living conditions he endured — including starvation — in Italy both during and after World War II.

Here are more tributes to Sammartino:

“Nobody deserves to be recognized for being a big star and paving the way for the stars of today more than Bruno,” said WWE executive Paul “Triple H” Levesque, when the legend was inducted into the Hall of Fame. “Everything that we have today in the business, Bruno was a cornerstone of that foundation.”

Devastated to hear the passing of a true icon, legend, great, honest and wonderful man…
A true friend…and one of the toughest people I’ve ever met.
My thoughts are with his entire family. #RIPBrunoSammartino #AmericanDream

RIP to the “Living Legend” Bruno Sammartino. The Italian superhero, the ultimate strongman. Make no mistake: For a generation of wrestling fans, Bruno Sammartino was THE top guy and always will be. pic.twitter.com/a4Iwh5a74r

Growing up, my grandfather Stu Hart would ALWAYS talk about Bruno Sammartino and what an incredible wrestler he was. I’m so grateful I had the chance to meet Bruno and tell him how much he meant to my grandfather and the entire Hart family. We will all miss you, Bruno. 🙏♥ pic.twitter.com/Dclu5hMGa6