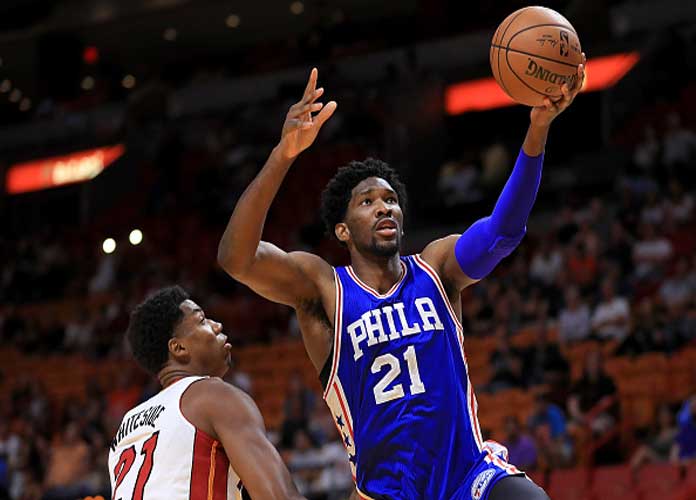 Yesterday’s game four between the Washington Wizards and the Philadelphia 76ers was an absolute dog fight of a game, because the 76ers lost NBA MVP finalist Joel Embiid to what the team called a sore right knee late in the first quarter. With Embiid gone for most of Game 4, Bradley Beal’s 27 points, Russell Westbrook’s 12th career playoff triple-double and Washington’s hack-a-Ben Simmons strategy led to a 122-114 win to cut Philadelphia’s series edge to 3-1.

76ers coach Doc Rivers wasn’t too pleased with the way his guys played down the stretch. “Each guy thought they had to win the game for us, You’ve still got to play right,” Rivers said. “Tonight we didn’t play right, on either end.” When Rivers was asked for more information about Embiid’s knee, he said  “I really don’t know,” and added that some “precautionary” tests will be done Tuesday.

The next game in this series is Wednesday in Philadelphia. Embiid’s potential absence could loom very large for the 76ers, as he’s the engine and driving force for this team. If we look back to Game 3’s 29-point win for the 76ers, one can see how Embiid’s career-high 36 points in 28 minutes led the charge. Even in Game 4, with Embiid getting run in the first quarter, the 76ers led by 11 points in the frame. With Embiid’s injury came Philadelphia’s downfall. At halftime, their lead was a mere one point.

In the third quarter, Washington led by as much as 92-78. In the fourth quarter, to seal the game, the Wizards utilized the hack-a-Simmons strategy. “Obviously that’s what they’re going to do,” Rivers said about Washington’s strategy to foul Simmons as much as possible. “That’s what they should do, And I’m OK with that.” When asked about potentially taking Simmons off the floor in these situations, Rivers said “You want me to take Ben Simmons off the floor? No. He’s pretty good. I’ll pass on that suggestion.” Simmons ended the game 5 for 11 on free throws. His free throw shooting will be under the microscope even more for the duration of this series, and will be vital if Embiid misses more time with his injury.