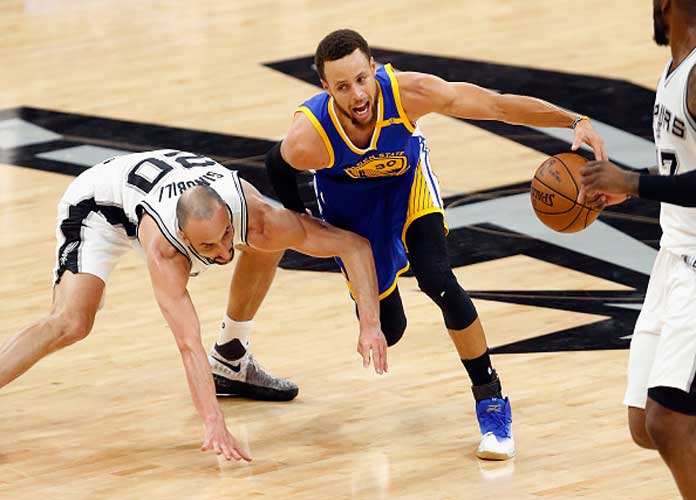 SAN ANTONIO, TX - MAY 22: Manu Ginobili #20 of the San Antonio Spurs and Stephen Curry #30 of the Golden State Warriors battle for the ball in the second half during Game Four of the 2017 NBA Western Conference Finals at AT&T Center on May 22, 2017 in San Antonio, Texas.

Stephen Curry scored 36 points and Kevin Durant added 29 points and 12 rebounds in leading the Golden State Warriors to a 129-115 road victory over the San Antonio Spurs on Monday night to finish a four-game sweep in the Western Conference Finals.

Golden State, which is undefeated in this year’s playoffs, has now reached its third consecutive NBA Finals.  The Warriors are the first team in league history to begin the postseason with a 12-0 run — their last loss came on April 10, their penultimate game of the regular season. Curry emphasized after Monday’s victory, however, that his team shouldn’t become complacent.

”(Being) 12-0 is great, but it doesn’t mean anything going into the next series, and we understand that,” said the two-time MVP.

The 2015 NBA champions will face either the defending champion Cleveland Cavaliers or the Boston Celtics in the NBA Finals, beginning June 1. The Cavs hold a 2-1 lead over the Celtics in the Eastern Conference Finals.

”It’s great to be one of the last two teams standing, we’ll see how it goes,” said Durant.

He gets buckets. He denies them too. @KDTrey5 with the 🚫 on ESPN. #StrengthInNumbers #DubNation pic.twitter.com/8vn5xrxsTC

Golden State led by 14 at halftime, and was ahead by double digits the rest of the night.

The Spurs’ only lead came on the opening possession when Manu Ginobili — who made his first start of the season in what may have been one of the last games of his career — scored a left-handed scoop shot. The 39-year-old Argentine guard has stated he will not decide whether he is retiring or not until after this season.

‘We started him tonight out of respect,” Spurs coach Gregg Popovich said. ”That was the whole reason for starting him. Before the game, you think it may or may not be his last game that he ever plays in, and I did not want to miss the opportunity to honor him in front of our home fans for his selflessness over the years.”

Given the uncertainty regarding Ginobili’s future with the team, the AT&T Center crowd treated the veteran to chants of “Manu, Manu” toward the end of Monday night.

Ginobili finished with 15 points in 32 minutes.

Last night our playoff run came to an end. Coach Pop & Manu reflect on the series and the season: pic.twitter.com/KEP5vZcJhm

”He kind of worked us pretty good these four games,” said Draymond Green, who recorded 16 points, eight rebounds and eight assists for the Warriors. ”So, I think he’s got quite a bit left in the tank. Obviously, it’s up to him how much longer he wants to go. But one thing about it, he’s definitely not a liability on the floor.”

Dubs had themselves a 💦 #SPLASH 💦 party in the 3Q. #StrengthInNumbers #DubNation pic.twitter.com/hjbZji0tFW

In the fourth quarter, Anderson dove to the floor for a loose ball that San Antonio batted away defensively. Anderson then tossed the ball up-court to Patty Mills, who assisted Ginobili for a 3-pointer that put the Spurs within 108-94 with seven minutes left.

”It’s the second time we’ve gotten swept in 15 years, and those are the easiest to digest because you’ve been overplayed,” Ginobili said. ”The opponent was better than us, and in this case, way better than us.”

👀 Check out some highlights of tonight’s series-clinching win. pic.twitter.com/xsrnFw8pzz

The Warriors have won their last ten games with Mike Brown as interim coach. Brown took over for head coach Steve Kerr after the latter stepped away for medical reasons in the first round of the playoffs.

Kerr has been around the team in recent weeks, nevertheless, and has delivered pep talks at practices — and in the locker room at halftime — and analyzing videos.

The 51-year-old former Spurs player has said his status for this year’s NBA Finals remains uncertain. Kerr continues to deal with complications from back surgery he underwent two years ago. He took an indefinite leave of absence from the Warriors on April 23.

Warriors majority owner Joe Lacob told ESPN late Monday night that he has told Kerr to take “as long as he wants” to return to the team.

“He is a fantastic coach and a fantastic human being and a great friend,” Lacob said. “I told him the other day, ‘I don’t even want to talk about or think about anything other than winning this championship. You can contribute in any way you can, and we’ll worry about the future in the future.'”

The Warriors on Monday were missing starting center Zaza Pachulia, who sat out his second consecutive game with a bruised right heel. Pachulia drew anger from Spurs fans and Popovich — who called him “unsportsmanlike” and “dangerous” — for stepping on an already-injured Leonard in Game 1. One Spurs fan even went as far as to sue the Georgian center and the Warriors for ruining San Antonio’s competitive chances in the playoffs by hurting Leonard.

Leonard missed his third straight game with a sprained left ankle. Popovich announced his All-Star forward would not play about two hours prior to tipoff.

Aldridge entered Game 4 averaging 18 points, but was held to 4-for-11 shooting in 22 minutes in the last contest of the Western Conference Finals.

”No excuses but a lot of unfortunate things happened, but we still tried to compete and do the best we could do,” Aldridge said. ”They’ve been the best team in the west for the last few years and they proved it again. (Warriors) came out and competed, they had a good game plan for the guys that we had out there, we just came out and did everything we could do.”

Brown said it was challenging to face the Spurs, and said that he had an enjoyable phone conversation with longtime friend and mentor Popovich before the series began.

SAN ANTONIO, TX – MAY 22: Manu Ginobili #20 of the San Antonio Spurs and Stephen Curry #30 of the Golden State Warriors battle for the ball in the second half during Game Four of the 2017 NBA Western Conference Finals at AT&T Center on May 22, 2017 in San Antonio, Texas.