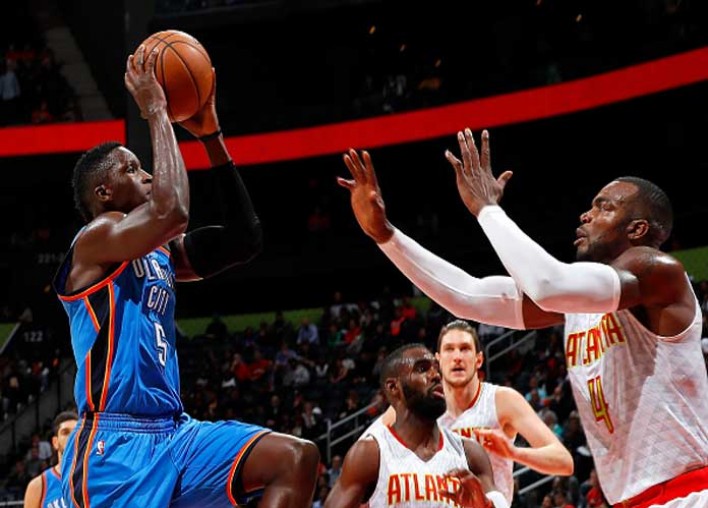 ATLANTA, GA - DECEMBER 05: Victor Oladipo #5 of the Oklahoma City Thunder drives against Paul Millsap #4 of the Atlanta Hawks at Philips Arena on December 5, 2016 in Atlanta, Georgia.

Victor Oladipo is enjoying a great year thus far with the Oklahoma City Thunder. His playing time, points per game and field goal percentage are all up from last season.

On Monday night in Atlanta, the 24-year-old shooting guard displayed his great strength and agility by throwing down a huge dunk over Dwight Howard, a 13th-year NBA veteran. Howard was left stunned.

Oladipo sank the dunk with 7:20 left in the second quarter to put the Thunder up 34-32. Oklahoma City ultimately beat the Hawks 102-99 on Monday.

The internet naturally went insane over the play:

Victor Oladipo just threw down the dunk of the year and it was up and over Dwight Howard. Holy crap. #Thunder

Russell Westbrook led the Thunder with 32 points, 13 rebounds and 12 assists, as well as a triple-double, in the win. Westbrook has now extended his streak of triple-doubles to six games.

It is the NBA’s longest such run since Michael Jordan had seven in a row in 1989.

“I just read the game,” Westbrook said. “The game will tell you what to do.”

“Obviously, the league hasn’t seen something like this in a long, long time,” Thunder coach Billy Donovan stated.

Westbrook found his range in the third quarter after missing eight of his first nine shots. He scored five of seven, three of them beyond the arc, and finished with 16 points in the period as Oklahoma City stretched a one-point halftime lead to 83-69 entering the fourth.

Atlanta rallied down the stretch, but Westbrook closed it out for the Thunder. He finished with 27 second-half points to hand the hawks their seventh consecutive loss and 10th defeat in the last 11 games.

This marks the longest losing streak for the Hawks since they dropped eight straight in February 2014.

Atlanta scored a shot to send the game into overtime after Kyle Korver forced a jump ball.

Tim Hardaway Jr.’s desperation 3-pointer at the buzzer failed to hit the rim.

‘Can’t dwell on it,” Hardaway said. ”I’ve got to move on to the next play, the next game.”

The Thunder (14-8) are off until Friday, when they host the Houston Rockets.

The Hawks, meanwhile, are back at play on Wednesday to host the Miami Heat.

ATLANTA, GA – DECEMBER 05: Victor Oladipo #5 of the Oklahoma City Thunder drives against Paul Millsap #4 of the Atlanta Hawks at Philips Arena on December 5, 2016 in Atlanta, Georgia.