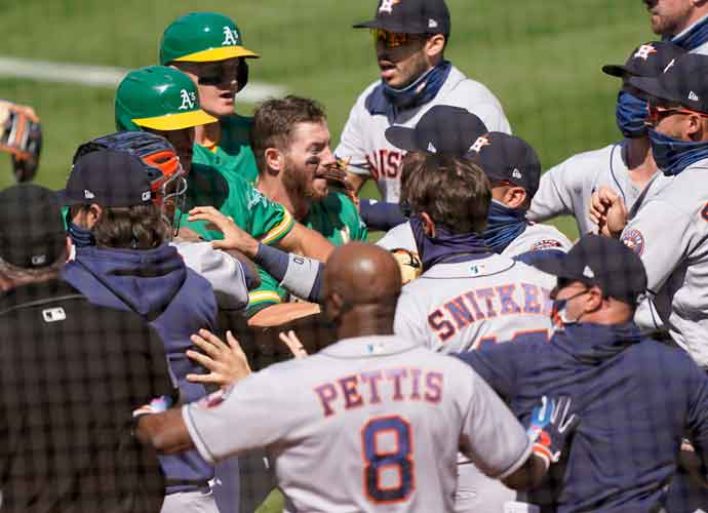 OAKLAND, CALIFORNIA - AUGUST 09: Players from the Houston Astros and Oakland Athletics get into a shoving match after Ramon Laureano #22 of the Athletics was hit by a pitch and charged into the Astros dugout in the bottom of the seventh inning at RingCentral Coliseum on August 09, 2020 in Oakland, California.

The abuse directed at the Houston Astros continues as tempers boiled over during Sunday’s game between the Astros and the Oakland A’s when A’s batter Ramon Laureano got hit by a pitch and took exception to it. Tempers got so high so fast that he ended up charging the Astros dugout which will certainly cause some suspensions for disregarding COVID-19 social-distancing protocols,

Laureano charges the Astros dugout and the brawl breaks out pic.twitter.com/CQ2K8kFnlb

This is a pretty clear reaction less to the pitch or the words said and more to the Astros cheating scandal that was revealed the last offseason that they reportedly spied on pitching signs and banged on a trash can to signal to their batter what type of pitch was coming. The Astros have already been the target of anger this season when Dodgers relief pitcher Joe Kelly threw some “wild” pitches toward them which earned him an eight-game suspension.

This likely won’t be the end to the conflict with the Astros despite the fact that the MLB seems to be defending them more than most teams when they suspended Kelly for eight games, more than any Astros players were suspended. The Astros sins won’t be forgotten anytime soon, and it is unclear where tempers will flair next.