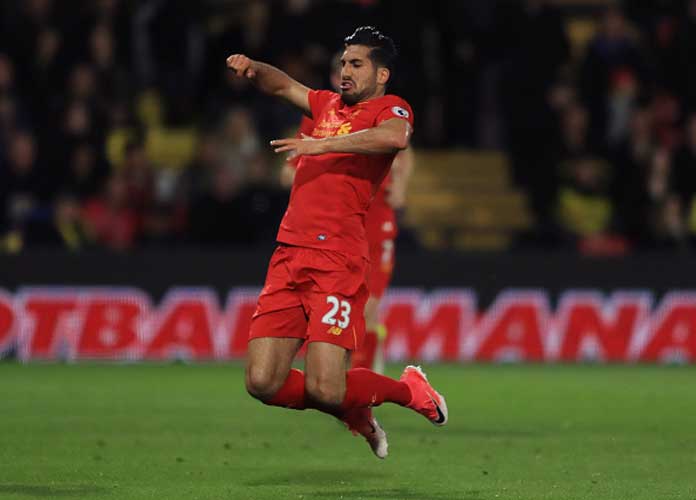 WATFORD, ENGLAND - MAY 01: Emre Can of Liverpool celebrates after scoring the opening goal during the Premier League match between Watford and Liverpool at Vicarage Road on May 1, 2017 in Watford, England. (Photo by Richard Heathcote/Getty Images)

Emre Can scored just his seventh Premier League goal at Vicarage Road on Monday since transferring to Liverpool from Germany three years ago, but it was a spectacular finish that helped the Reds secure a 1-0 road victory over Watford.

The 23-year-old German midfielder took a lofted pass from Lucas in the penalty box and, with his back to the goal, jumped to fire a bicycle-kick volley shot past Watford’s Brazilian keeper Heurelho Gomes that sailed into the top corner with about two minutes remaining in the first half.

Can drove Liverpool and their fans wild after scoring the stoppage-time goal to put his team up 1-0 at the break. Even the Reds’ coach was stunned.

“We scored a fantastic goal,” Jurgen Klopp said.”Actually, I would love to see it again – everybody is speaking about it. I only saw it once but it looked already pretty nice. I turned a little early and didn’t see it hit the back of the net.

“He is a good boy, a good player and he deserves it,” added the German manager.

Can even surprised himself, saying he couldn’t remember netting a goal like that before in his career. The German midfielder boasts 11 scores in 100 career league starts.

“I have never scored a goal like that – maybe when I was younger. That is the best goal I’ve ever scored,” Can said. “I saw the space and I ran behind and my first thought was that I wanted to head it, then I didn’t think too much. I couldn’t do anything else there — the ball was a bit behind.”

Moments before Liverpool’s lone goal, the visitors had come close to scoring after substitute Adam Lallana took his own volley-shot that rebounded off the crossbar and dropped straight down in front of the goal.

“He does like to try speculative efforts, and we will not have a pop now after he produced that,” said the English midfielder. “It was a ‘worldy’ goal, worthy of winning any game. Credit to him, he was brave enough to try it and it flew into the top corner.”

Emre Can: @carlsberg Man of the Match! 👏 pic.twitter.com/siaV6AQG30

Can’s score could be a contender for goal of the season, which will be decided at the end of the campaign.

Tottenham’s Dele Alli won the award last year for his incredible goal at Crystal Palace. The last Liverpool player to win the honor was Steven Gerrard, who scored the game-winner in the 2006 FA Cup final.

Liverpool, who earned three points with the win, are now halfway towards another crucial three points on route to Champions League qualification. The Reds are also third in the Premier League standings with 69 points, well behind second-place Tottenham (77) and leaders Chelsea (81).

Klopp’s team will next host Southampton, who are ninth in the Premier League, on Sunday. Liverpool boast several other top goal-scorers like midfielders Jordan Henderson, Sadio Mane and Georginio Wijnaldum, all of whom won the Match of the Day’s Goal of the Month competition.

WATFORD, ENGLAND – MAY 01: Emre Can of Liverpool celebrates after scoring the opening goal during the Premier League match between Watford and Liverpool at Vicarage Road on May 1, 2017 in Watford, England. (Photo by Richard Heathcote/Getty Images)