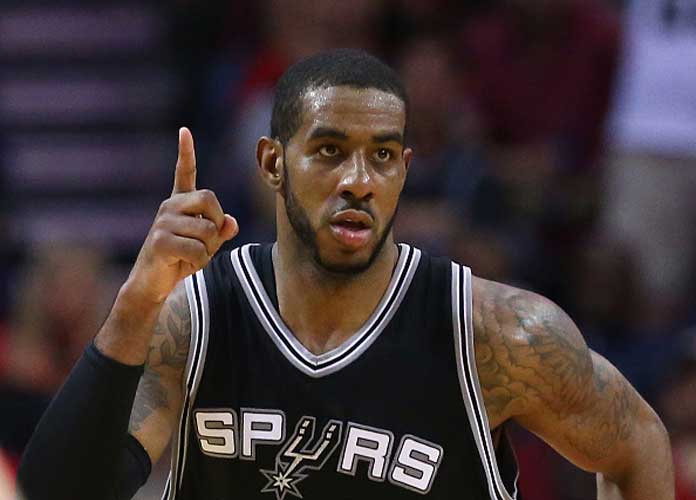 HOUSTON, TX - MAY 11: LaMarcus Aldridge #12 of the San Antonio Spurs reacts against the Houston Rockets during Game Six of the NBA Western Conference Semi-Finals at Toyota Center on May 11, 2017 in Houston, Texas.

LaMarcus Aldridge scored a season-high 34 points to lift the Kawhi-Leonard-less San Antonio Spurs to a 114-75 road win over Houston on Thursday night to eliminate the Rockets from the Western Conference Semifinal series in Game 6.

Aldridge, an 11-year veteran who is in his second season with the Spurs, also contributed 12 rebounds two nights after Leonard rolled his ankle in San Antonio’s overtime win in Game 5.

”He’s really turned it on,” Popovich said of Aldridge. ”Demanded the ball, got in good position … he was wonderful on the boards and of course he passes it really, really well and gets it moving for us.”

Aldridge, who had ten points in the first quarter, became the first Spur to record 34 points and 12 rebounds in a playoff game since Tim Duncan against Phoenix in 2008.

”I just touched it a little bit more tonight so I had a chance to figure it out,” Aldridge said. ”I was trying to be more dominant down there. So I was willing to take some contested shots tonight and I got into my rhythm early and after that I was good to go.”

San Antonio led by 19 at halftime in a game that ended rapidly. The Spurs have now reached the Conference Finals — where they will face the Golden State Warriors this year — for the 13th time.

Trevor Ariza led the Rockets with 20 points, while MVP contender James Harden managed only a season low ten points on 2-of-11 shooting and fouled out with 3:15 remaining.

Harden stated he was to blame for the defeat.

”Everything falls on my shoulders,” he said. ”I take responsibility for it, both ends of the floor. It’s tough, especially the way we lost at home for Game 6. But it happened and we move forward.”

Rockets coach Mike D’Antoni, meanwhile, admitted it was possible that Houston’s frustration with losing Game 5 — a matchup his team could have won — may have been part of the cause of Thursday’s blowout loss.

”It could, ” said D’Antoni. ”I’ve been on both sides of this thing. Sometimes life hits you in the face. No matter what it was, we just didn’t have it tonight.”

Jonathon Simmons replaced Leonard and finished with 18 points for the Spurs, who held a 23-point lead by the end of the third quarter and were then up by 30 (94-64) in the fourth. At that point, many fans began leaving Toyota Center.

“No one expected a Game 6 … win like this, but we just played hard,” said Pau Gasol, who finished with ten points and 11 rebounds.

San Antonio held Houston to less than 100 points for the third time this series after the Rockets scored in double digits only five times during the regular season. The hosts’ 75 points were a season low and the least points the franchise had scored in a postseason game since recording just 70 against the Los Angeles Lakers on May 17, 2009.

The Spurs will visit the Warriors on Sunday for Game 1 of the Conference Finals.

HOUSTON, TX – MAY 11: LaMarcus Aldridge #12 of the San Antonio Spurs reacts against the Houston Rockets during Game Six of the NBA Western Conference Semi-Finals at Toyota Center on May 11, 2017 in Houston, Texas.