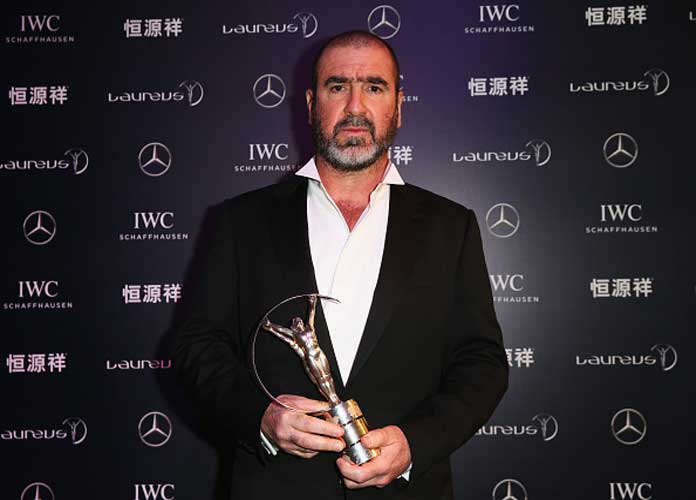 Former Manchester United forward Eric Cantona shared an emotional video of himself on Tuesday in which he expressed solidarity with the people of Manchester following the terrorist bombing at an Ariana Grande concert on Monday night.

The Frenchman — who played for United from 1992 to 1997 — posted the clip one day before his 51st birthday to voice his support for the victims of the bombing, which left 22 dead and more than 59 injured to mark the most horrific attack on British soil since the 2005 London subway bombings.

Eric Cantona’s message to the people of Manchester #MUFC pic.twitter.com/4CFQ7rh5jN

Cantona served as captain for United for much of his tenure with the team, and scored 66 goals for the Red Devils across all competitions. The Frenchman also led United to four Premier League titles and two FA Cup victories.

United issued a statement to relay their condolences to the victims, and closed Old Trafford the day after the attack while also holding a minute of silence before practice at their training ground and before flying to Stockholm to face Ajax in the UEFA Europa League final on Wednesday. UEFA approved United’s formal request to cancel their press conference before the final in the Swedish capital.

Marcus Rashford — a United forward born and raised in Manchester — shared a photo of his hometown on Twitter, while team-mate Jesse Lingard posted: “My thoughts and prayers are with everyone affected by last nights attack on this beautiful city. We will stand together in this dark hour”

Manchester City, meanwhile, have opened a help center at their own Etihad Stadium in addition to releasing their own statement.

“It’s with great sadness we hear of the terrible events at the Arena,” City’s statement read. “Our hearts go out to all affected and to our city’s emergency services.”

The club’s captain Vincent Kompany tweeted: ‘I would like to express my deepest condolences to the families of the victims. It’s a sad day for the great city of Manchester. #Unity’.

Another English club who expressed solidarity with the victims of the attack was Chelsea. The club announced Wednesday in a statement on its official website that it would be canceling its parade in London on Sunday to celebrate its Premier League title victory.

The Blues mentioned the British government’s announcement from Tuesday that national security would be increased given greater threat levels. Prime Minister Theresa May said the terror threat level had been raised to “critical.”

“Everyone associated with Chelsea Football Club offers our heartfelt condolences to those affected by Monday’s terror attack in Manchester. Our thoughts go out to all the victims, and their families and friends,” the club’s statement read.

“In light of these tragic events, we feel it is inappropriate to go ahead with the victory parade in London on Sunday.

“Given the heightened security threat announced by the Government, and recognizing that this is a developing situation, we have given this careful consideration. We strongly believe, in the interests of everyone, this is the correct course of action. We are sure our fans will understand this decision.

“Having consulted with the Metropolitan Police, Hammersmith & Fulham Council and other authorities, we know the emergency services would have been as professional as ever, but we would not want in any way to divert important resources by holding an additional, non-ticketed event on the streets of London.”

Chelsea also announced that its players would wear black armbands during the FA Cup final at Arsenal on Saturday and donate to a fund to support the victims.

Arsenal canceled its planned watch party for the FA Cup final at Emirates Stadium due to security concerns, and added the team won’t hold a parade if the Gunners claim the title.

“As always, the safety of our supporters and staff is paramount and we are in close contact with security services,” Arsenal chief executive Ivan Gazidis stated. “After taking their advice we have reluctantly taken the decision to cancel the screening and potential parade. We are sorry for any disappointment this causes but it is in everyone’s best interests.”