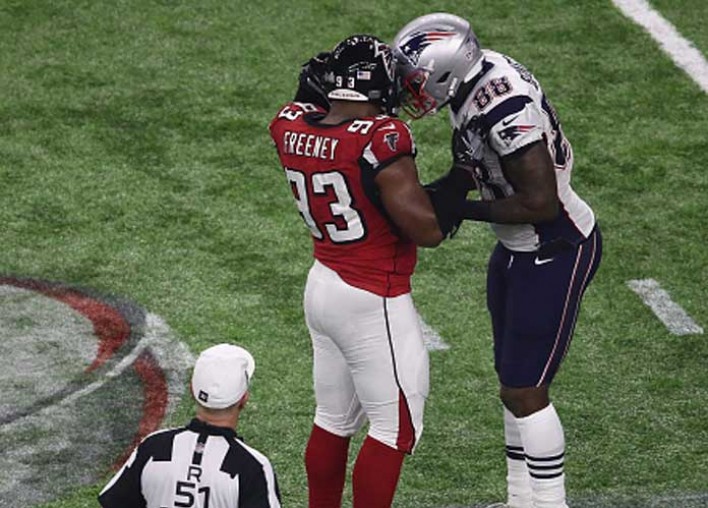 HOUSTON, TX - FEBRUARY 05: Martellus Bennett #88 of the New England Patriots and Dwight Freeney #93 of the Atlanta Falcons separate their helmets after colliding during the third quarter of Super Bowl 51 at NRG Stadium on February 5, 2017 in Houston, Texas. (Photo by Ezra Shaw/Getty Images)

Atlanta Falcons defensive end Dwight Freeney and New England Patriots tight end Martellus Bennett fought for the ball several times in Sunday night’s Super Bowl LI in Houston, but one of their collisions ended in a strange incident – there helmets got stuck together!

Play stopped briefly in the dying minutes of the third quarter when the two players’ helmets got hooked together. Freeney and Bennett had to ask the officials for assistance, and one of them managed to separate the helmets.

It isn’t often one sees this in a football game, but it sure was amusing to watch, as this fan noted.

The Patriots went on to win the Super Bowl 34-28 in overtime at NRG Stadium after a thrilling fourth-quarter comeback that saw them erase a 25-point deficit.

Bennett also stated, following Sunday night’s win, that he would not attend the Super Bowl celebration at the White House because he doesn’t support President Donald Trump.

The tight end added he was not worried about what Patriots owner Robert Kraft might think of his decision.

The Patriots quarterback is friends with Trump, nevertheless, as both have stated they occasionally call each other and have played golf together.

Bennett had previously said that he might not go to Washington, DC if his team won.

When a reporter asked him last week if he would take part in the trip, Bennett replied: ‘I don’t know, I’ve got to win the Super Bowl. But most likely no, because I don’t support the guy that’s in the house.’

HOUSTON, TX – FEBRUARY 05: Martellus Bennett #88 of the New England Patriots and Dwight Freeney #93 of the Atlanta Falcons separate their helmets after colliding during the third quarter of Super Bowl 51 at NRG Stadium on February 5, 2017 in Houston, Texas. (Photo by Ezra Shaw/Getty Images)