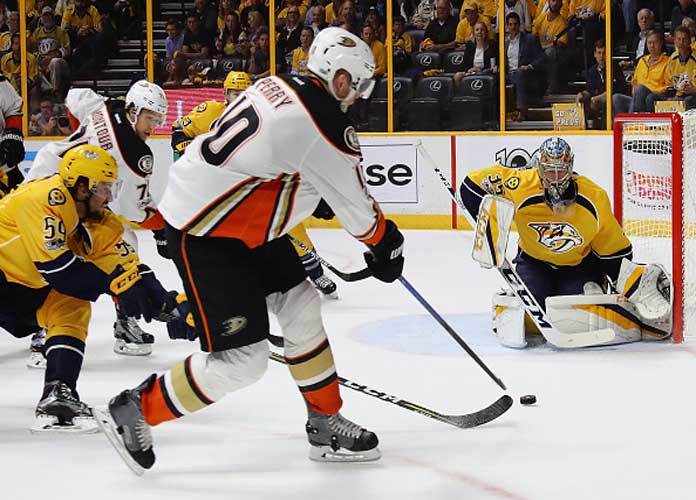 NASHVILLE, TN - MAY 18: Corey Perry #10 of the Anaheim Ducks shoots the puck against Pekka Rinne #35 of the Nashville Predators during the second period in Game Four of the Western Conference Final during the 2017 Stanley Cup Playoffs at Bridgestone Arena on May 18, 2017 in Nashville, Tennessee. (Photo by Bruce Bennett/Getty Images)

Corey Perry scored in overtime to lift the Anaheim Ducks to a 3-2 road victory over the Nashville Predators in Game 4 of the NHL Western Conference Final to even the best-of-seven series 2-2.

At 10:25 of the extra session, Perry fired a shot at the goal from the right boards, and the puck ricocheted off Predators defenseman P.K. Subban’s stick and past Pekka Rinne.

With the game-winner, his 36th goal, the Ducks right wing and alternate captain passed Teemu Selanne for second place on the franchise’s all-time playoff scoring list. Perry also scored on his 32nd birthday in Tuesday’s Game 3, which Anaheim lost 2-1 in Nashville.

“Like we’ve been saying all playoffs, we have a checklist that we go through every single day,” Perry said. “It doesn’t matter when it is in the game, you’ve got to go back, you’ve got to think of what’s on that list and adversity is one of them, ebbs and flows of a game.

“We knew coming into overtime, you put that jersey on you, go out and play like you did in the first period; hard-nosed, pucks in deep. We kind of changed the momentum there. We got some chances, and we got the break.”

Predators forward Filip Forsberg tied it 2-2 with 34.5 seconds remaining in regulation. Viktor Arvidsson passed the puck from behind the net and Forsberg shot through John Gibson’s five-hole for his seventh goal.

Rickard Rakell and Nick Ritchie gave the Ducks a 2-0 lead with goals in the first and second period, respectively. Rakell’s slap shot at 11:30 of the first beat Rinne from the top of the left face-off circle, as Anaheim caught Nashville in a line change. Then at 10:22 of the second, Ritchie fired a wrist shot from the right face-off circle between the legs of Nashville defenseman Roman Josi and past Rinne for his fourth postseason goal.

Subban opened scoring for the Predators at 13:33 with a slap shot from the right point for his second playoff goal. The puck passed through traffic for the score.

“I thought we did a good job of getting back in the game,” Subban said. “We had an opportunity in overtime and just an unlucky bounce so turn the page and get ready for next game.”

Nashville had a 5-on-3 power-play for 1:31 in the third but was unable to score.

Anaheim allowed two shots on goal in the opening period, a franchise record for least shots surrendered in a period of a Stanley Cup Playoff game.

NASHVILLE, TN – MAY 18: Corey Perry #10 of the Anaheim Ducks shoots the puck against Pekka Rinne #35 of the Nashville Predators during the second period in Game Four of the Western Conference Final during the 2017 Stanley Cup Playoffs at Bridgestone Arena on May 18, 2017 in Nashville, Tennessee. (Photo by Bruce Bennett/Getty Images)