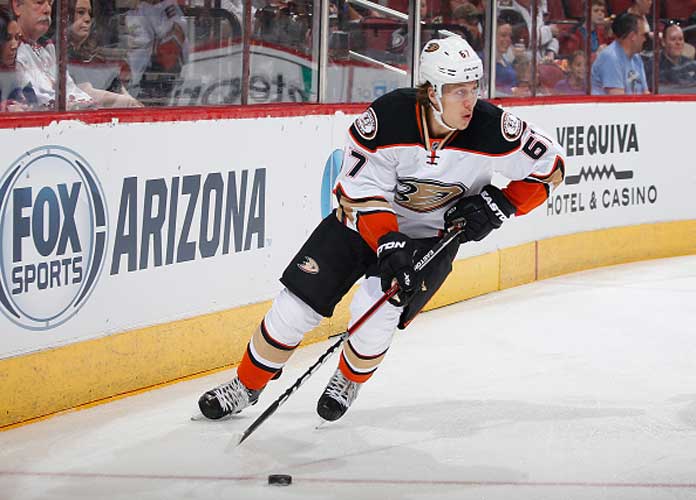 GLENDALE, AZ - MARCH 03: Rickard Rakell #67 of the Anaheim Ducks skates with the puck during the NHL game against the Arizona Coyotes at Gila River Arena on March 3, 2016 in Glendale, Arizona. The Ducks defeated the Coyotes 5-1. (Photo by Christian Petersen/Getty Images)

The Anaheim Ducks’ executive vice president and general manager, Bob Murray, has resigned from his position.

The move is effective immediately, and Murray will enroll in an alcohol abuse program. The decision was made one day after the Ducks placed Murray on administrative leave pending an internal investigation into allegations of improper professional conduct.

Anaheim has not specified when these complaints were made, or how many people have come forward.

“First and foremost, we apologize on behalf of the organization to anyone affected by misconduct from Bob,” Henry and Susan Samueli said in a Wednesday statement. “We expect every member of our organization to be treated with respect and will not stand for abuse of any kind. We will now begin a methodical, extensive search for a permanent general manager to lead us forward. We expect to complete this process no later than next summer.”

Moments after the news was announced, the NHL released a statement, tying the investigation back to its hotline used to reporting such tips and details.

“We support the decision by Bob Murray to resign his position,” the league wrote. “While we understand that he is seeking appropriate counseling and treatment for his personal issues, there is no excuse and there is no place in our League for the type of behavior that was recently reported through the NHL hotline. We thank the Ducks’ organization for its prompt and appropriate response to the hotline reports. The league and its clubs are committed to a safe and welcoming workplace across the NHL and will continue to take any and all action to achieve that goal.”

“I want to apologize to anyone adversely affected by my behavior. I vow to make changes to my life, starting with enrolling in a treatment program. I want to thank Henry and Susan Samueli, and Michael Schulman, as working for them has been one of the highlights of my career. As I step away from the Ducks, I will focus my attention on where it should be: improving my life for the betterment of my family and friends.”