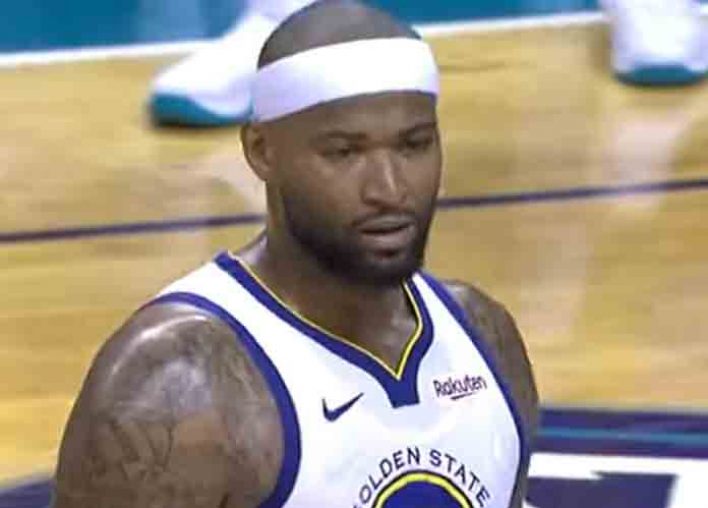 The Golden State Warriors may have had a bigger loss than the 31-point lead they blew in Monday night’s Game 2 loss to the Los Angeles Clippers, which tied up the first-round playoff series 1-1.

Boogie went back to the locker room after this play with apparent leg injury. pic.twitter.com/WgzWjxA17B

Another look at the play which injured Boogie. pic.twitter.com/wBle8wHPOs

He’s expected to miss the rest of the postseason but some say there’s a slight hope that “Boogie” could return if the Warriors reach the NBA Finals. Golden State will hope that their fifth All-Star only suffered a quad strain but there’s evidence that the injury is serious. In fact, Charles Barkley compared it to his career-ending quad injury in 1999.

“There’s a pretty significant quad injury,” Warriors coach Steve Kerr said after the game. “We’ll get an MRI, but he’s going to be out for – I’ll just say a while because I think it’s unclear right now how long he’ll be out. It’s significant.”

Cousins missed the entirety of the playoffs last year and almost sat out a full 365 days following a torn left Achilles he suffered while with the New Orleans Pelicans. The former Kentucky star hoped that a bounce-back season in the Bay Area would catapult his career earnings after signing a one-year deal.

“It’s tough, for sure,” Warriors guard Steph Curry said. “You feel for him considering what he’s been through this last year. This is a big stage, the playoffs. He’s been looking forward to this. I don’t know the extent of the injury at this point. Hope he gets back sooner than later. Just man-to-man in terms of him, what he’s been through, it’s tough for sure. There’s no sugarcoating it at all. You hate seeing that opportunity again on this big stage taken away from him like that.”

With the absence of Cousins, the Warriors will turn to Andrew Bogut or Draymond Green to lock up the center position as they had done previously.

Around the NBA, fans, players, and executives sent out their prayers and reactions to the news about Cousins. Here are a few:

Oh No! DeMarcus Cousins is Hurt! Now the Warriors can only try to win with just 4 All-Stars. 🙄

I swear to God that if DeMarcus Cousins is seriously hurt again, I’m gonna flip so many tables