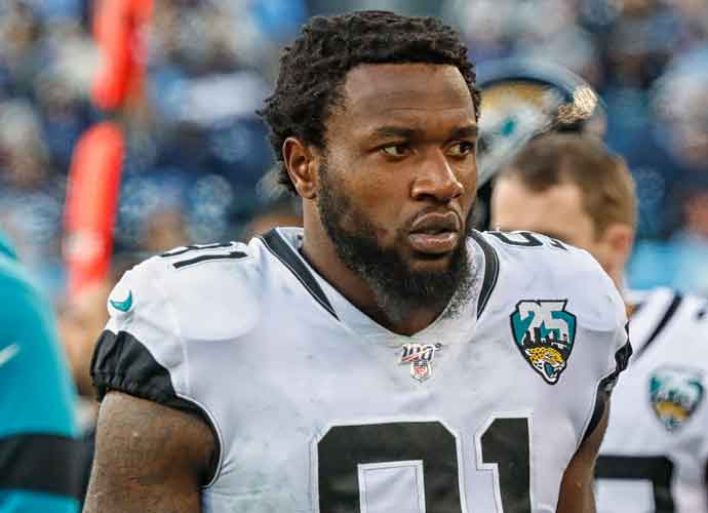 NASHVILLE, TENNESSEE - NOVEMBER 24: Yannick Ngakoue #91 of the Jacksonville Jaguars watches from the sideline during a game against the Tennessee Titans at Nissan Stadium on November 24, 2019 in Nashville, Tennessee

If the frustrations of the COVID-19 pandemic weren’t enough for the NFL family, the offseason heating up, and unhappy players looking to relocate, is only more fuel to the fire.

On Monday, Jacksonville Jaguars defensive end, Yannick Ngakoue, got a bit, defensive, with the son of the team’s owner and senior Vice President of football administration and technology, Tony Khan.

The rant started with a tweet from Ngakoue, saying, “FREEYANN.” Which was then followed by a direct shot to Khan, tweeting “@TonyKhan stop hiding moe.”

A back and forth series of tweets unfolded between the two; Ngakoue playing the victim, and Khan trying to weather the spontaneous social media attack. Ngakoue mentions that the two had discussed moving the defensive end, as the “Chargers game was my last game.” Then continued to say that Khan has been dodging his camp’s phone calls, and calling him “spoiled.”

After some more childish back and forth, the tweeting stopped between the two. Six hours later, Ngakoue tweeted, “To my new future team whomever it may be. I can’t wait to bring great discipline, integrity, and work ethic to that new city. Wherever I may land your going to get the hardest working defensive end in the league!”

The bad blood between Ngakoue and the Jags organization began in July, when Tom Coughlin, the then-executive VP of football operations, cut off negotiations with Ngakoue and his agent out of the blue. Reportedly, the Jags offered the defensive end a deal that would pay $19 million per year, but he ended up turning it down. All of this coming after Ngakoue put up nearly 30 sacks in three seasons, and playing on a salary of just $2.025 million after his 11-day holdout during training camp.

The Jaguars placed the franchise tag (non-exclusive) on Ngakoue on March 13, allowing him to earn $17.8 million in the coming year. Ngakoue has not yet signed the contract tender, and in the time since, has urged the team to trade him through social media.

League sources have revealed the fact that the Jaguars are looking for at least a first-round pick for the defensive end, and while teams have been on the phone discussing possibilities, no one has made a formal offer.

League analysts also suspect another area of friction for Ngakoue is the fact that he is in search for a long-term contract. For pass-rushers, the market is not as lucrative, and Ngakoue is looking to be the exception, along with names like Trey Flowers, Frank Clark and Demarcus Lawrence, who all signed big deals in 2019.

Ngakoue has placed himself second all-time on the Jaguars sack list, and is responsible for many of the defensive touchdowns that the Jaguars defense is keen to keep scoring. Other big name defensive ends have learned to lower their asking price in recent months, in terms of contracts, because of the shift in the market for the position. The big contracts that have been trending downwards in pay. If Ngakoue lowers his asking price a bit, he may just find a new home before the next NFL season begins.