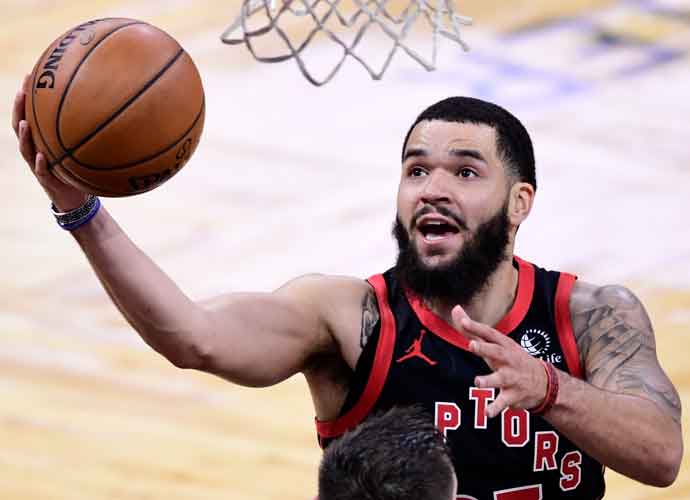 ORLANDO, FLORIDA - FEBRUARY 02: Fred VanVleet #23 of the Toronto Raptors drives to the basket during the third quarter against the Orlando Magic at Amway Center on February 02, 2021 in Orlando, Florida. NOTE TO USER: User expressly acknowledges and agrees that, by downloading and or using this photograph, User is consenting to the terms and conditions of the Getty Images License Agreement. (Photo by Douglas P. DeFelice/Getty Images)

Fred VanVleet has not been a prolific scorer his entire career, but on Tuesday, he sure was. The combo guard set a franchise-record 54 points and broke an NBA record against the Orlando Magic.

The Toronto Raptors‘ guard is not known to be a high scorer, but he proved otherwise in Tuesday’s historic game. VanVleet started the first quarter hot, converting five of six from three-point range. That would set the tone. VanVleet remained hot throughout the game, especially from beyond the arc. He sank a whopping 11 of 14 attempts from long range. Additionally, he went perfect from the free-throw line, sinking all nine of his attempts. The guard finished the game with 54 points, as he was pulled from the game by coach Nick Nurse with three minutes left in the fourth quarter.

GET DEALS ON RAPTORS TICKETS HERE!

VanVleet’s 11 three-pointers were just short of breaking the record for most three-pointers made in a game, which was 14, set by Klay Thompson. By the end of the first half, the Raptors’ emerging star had made eight three-pointers. This put him on pace to tie or break Thompson’s record. However, the 26-year-old opted to not take more field goals from beyond the arc. In the third quarter, VanVleet converted three three-pointers and sank one in the final frame.

Nevertheless, the guard still came away with a record. VanVleet’s 54 points became a new franchise record for Toronto. It broke the previous franchise record set by the beloved franchise icon, Demar DeRozan, who scored 52 points.

VanVleet also set a new NBA record for most points scored by an undrafted player in a single game. The previous record was 53 points by Hall of Famer, Moses Malone.

After the historical game, the undrafted guard received a call from DeRozan. The two played together for two seasons before DeRozan was sent to the San Antonio Spurs. DeRozan congratulated his former teammate through a tweet. DeRozan wrote, “Congrats to my brotha Freddy V! Kyle old ass couldn’t do it. Glad you did champ! Been telling you!”

Congrats to my brotha Freddy V! Kyle old ass couldn’t do it. Glad you did champ! Been telling you!

After the game, VanVleet talked about his record-breaking game saying, “It was easy,” before elaborating about his scoring, remarking, “Most of those were in rhythm, within the offense, playing in the flow of the game.” The combo guard was humble about his career-high scoring, emphasizing that he wanted to win, “I wanted to win more than I wanted 50 points.”

Fellow teammate Kyle Lowry, also a franchise icon, congratulated and spoke about VanVleet’s 54 points. The veteran player praised his younger teammate saying, “Tonight is really special because it came from a kid who was undrafted, worked his way to an NBA player and an NBA starter, and possibly this year an All-Star and possibly an All-Defensive Player. That’s what makes it really special.”