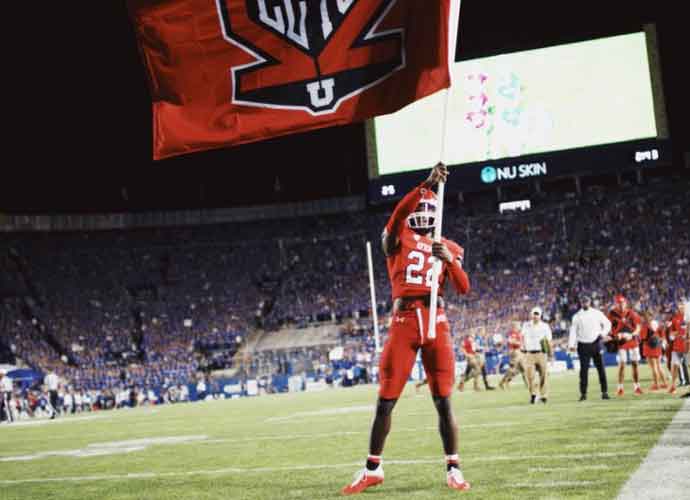 Aaron Lowe (Image: U. of Utah)

Salt Lake City Police announced that Lowe died at the scene after being shot by an unknown suspect. A woman was also shot and taken to the hospital in critical condition. The incident took place hours after Utah’s 24-13 victory against Washington State.

“We are devastated to hear about the passing of Aaron Lowe,” stated Utah coach Kyle Whittingham. “Our thoughts and prayers are with Aaron’s family and friends, along with the other individual who was harmed in this tragic incident. Aaron was a great teammate, friend, brother and son and was loved by anyone who crossed paths with him. He will be deeply missed.”

SLCPD received six calls related to the party between 10:38 p.m. and 12:02 a.m. However, officers didn’t intervene until a person called 9/11 at 12:19 to report a conflict involving a weapon.

“I am deeply saddened by the shooting death of Aaron Lowe,” said Chief Mike Brown in a statement released by SLCPD. “This talented young man touched the lives of so many here in Salt Lake City and in Texas. The Salt Lake City Police Department grieves with and offers our condolences to the Lowe family and the University of Utah community. Our condolences also extend to the other person injured in this shooting. I hope for their quick recovery. These investigations are complex. Our detectives have been hard at work trying to identify the suspect or suspects in this case.”

A month ago, Lowe was the recipient of the Ty Jordan Memorial Scholarship, in honor of his former teammate and 2020 Pac-12 Offensive Freshman of the Year who tragically died of an accidental self-inflicted gunshot wound. Both players had also attended West Mesquite High School in Mesquite, Texas before sharing the field in Utah.

After winning the award, Lowe decided to switch his number to 22 in honor of his close friend.

“It was his personality that influenced me,” said Lowe. “I had someone in him — someone who came from where I came from. It is because of him that I changed to No. 22. The impact you left on me and all of your friends, that will be something we will never forget.”