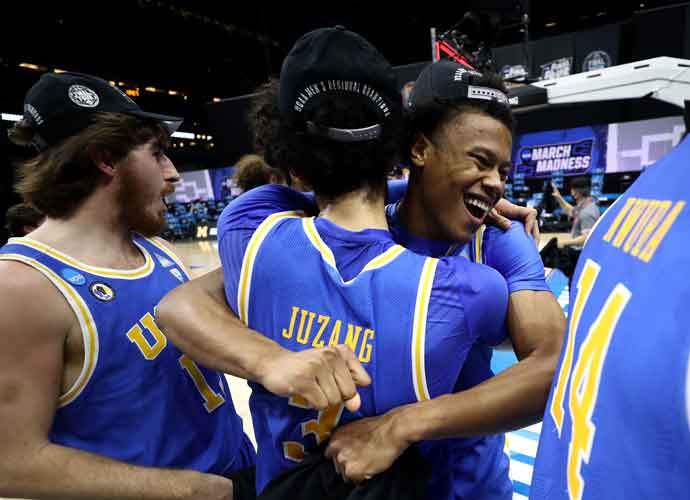 INDIANAPOLIS, INDIANA - MARCH 30: Johnny Juzang #3 of the UCLA Bruins celebrates with Jaylen Clark #0 after defeating the Michigan Wolverines 51-49 in the Elite Eight round game of the 2021 NCAA Men's Basketball Tournament at Lucas Oil Stadium on March 30, 2021 in Indianapolis, Indiana. (Photo by Jamie Squire/Getty Images)

In a shocking turn of events late last week, it was announced that USC and UCLA will be joining the Big Ten as early as 2024. The two Pac-12 heavyweights said that their application to join the Big Ten was accepted on Thursday night.

The Big Ten announced that the vote among conference presidents and chancellors was unanimous in favor of accepting the two schools. “The unanimous vote today signifies the deep respect and welcoming culture our entire conference has for the University of Southern California, under the leadership of President Carol Folt, and the University of California, Los Angeles, under the leadership of Chancellor Gene Block,” Big Ten commissioner Kevin Warren said.

I was told this is – or is close to – the Big Ten’s wishlist. But it’s a fluid and very well-guarded process (How was the UCLA/USC news kept silent? Amazing.)

So who knows how it’ll develop.

Source not as confident in UNC as others.

USC Athletic Director Mike Bohn also said that the two schools are extremely excited about the addition of the schools to the Big Ten Conference. “We are excited that our values align with the league’s member institutions,” Bohn said in a statement. “We also will benefit from the stability and strength of the conference; the athletic caliber of Big Ten institutions; the increased visibility, exposure, and resources the conference will bring our student-athletes and programs; and the ability to expand engagement with our passionate alumni nationwide.”

The PAC-12, however, did not share the same excitement, as they released a statement highlighting how extremely surprised and disappointed they were by the departure of two flagship programs. “We have a long and storied history in athletics, academics, and leadership in supporting student-athletes that we’re confident will continue to thrive and grow into the future,” it said in a statement. “The Pac-12 is home to many of the world’s best universities, athletic programs, and alumni, representing one of the most dynamic regions in the United States. We’ve long been known as the Conference of Champions, and we’re unwavering in our commitment to extend that title.”

Many see the departure of the programs as a potential death blow to the conference, with Oregon and Washington currently seeking alternative conferences for self-preservation. Many PAC-12 schools are looking at potential Big-12 moves with certain Mountain West schools like San Diego State looking to join the Pac-12.

This move is likely to compete with the SEC’s addition of Texas and Oklahoma, which is set to take place at the beginning of 2023.