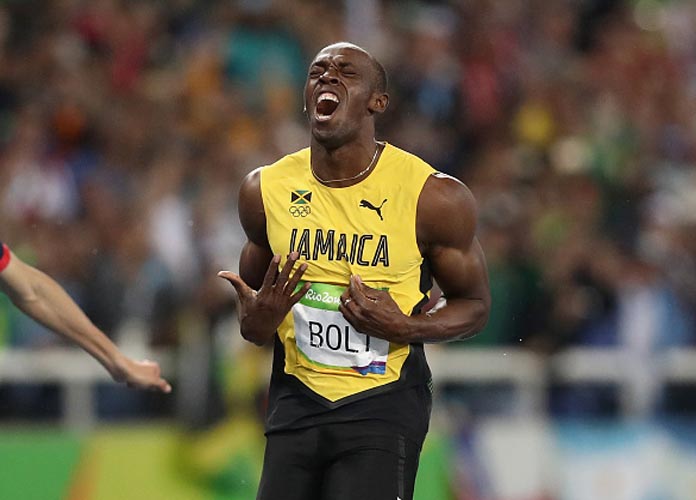 Usain Bolt reminded everyone why he is the world’s fastest man on Thursday night by winning the 200-meter final in 19.78 seconds to easily claim his third straight Olympic title in the event, adding to his gold from the Beijing 2008 and London 2012 Games.

As his name was announced and he entered the Olympic Stadium Thursday, the Jamaican– who turns 30 this Sunday– spread his arms, wide, flashed a big smile for the cameras, and wiggled his eyebrows. Bolt also did a quick samba dance and eventually dropped to his knees, pointing to the sky, where a light rain was beginning to fall amidst a cool, steady breeze. As soon as the gunshot went off, he rose to begin his sprint and from there, it was clear to everyone what would likely happen in the final race of his Olympic career.

“I’ve proven to the world that I’m the greatest,” Bolt said. “This is what I came here for. This is why I said this is my last Olympics. Because I cant prove anything else.”

Bolt has now won both the 100 and 200 meters at three consecutive Olympics, an accomplishment that will surely go down as one of the most unbeatable records in Olympic history and more generally in the world of sports.

Canada’s Andre De Grasse took silver with a time of 20.02, a second Olympic medal this year following his 100m bronze.

France’s Christophe Lemaitre claimed bronze in the 200 with a time of 20.12 seconds, after edging Great Britain’s Adam Gemili, who finished in the exact same time as him.

Bolt can still add another medal in the 4×100 relay final on Friday. The Jamaican admitted he was not happy with his performance Thursday, even though the race was never close.

Bolt strayed from the pack as he came around the turn. He puffed out his cheeks down the final stretch.

Bolt said he lost his form, and he was turning his head back and forth as he crossed the finish line.

After the race, he fell to his knees and raised his arms toward the stands. As the other runners shuffled off the track, Bolt took a solitary walk around the stadium, the Jamaican flag wrapped around his shoulders, as Bob Marley songs played over the speakers.

Bolt said on Sunday, after winning his first gold medal of the 2016 Olympics, that he felt he needed two more in Rio to “become immortal.” He has previously stated that he plans to retire following the world championships next year.

Following the race, Bolt also added that he proved that an athlete could be great while competing clean, without drugs. “I’ve made the sport exciting, made people want to see the sport,” he said.

Just after finishing the race, Bolt also paid homage to NBA superstar LeBron James. The Jamaican broke out the Cleveland Cavalier’s “Silencer” move, lifting his knees high while pushing his hands down sharply, with the palms flat.

James later tweeted at Bolt to show his approval, just as he did earlier in the week when he expressed his amazement with Bolt’s 100-meter win:

Nothing u can do vs that cheetah! #Bolt

Bolt’s fellow competitors were hailing his legacy. Many were asked if it was a relief to see him retire.

“If his time is up, I guess a new person has to come in there,” De Grasse said.

After the race, a reporter asked Bolt what a 30-year-old retired person does with his time.

“What am I going to do? I have no idea,” Bolt said, laughing. “You just stressed me out about that.”

The most decorated Olympic sprinter in the world will surely find a good way to spend his time.