The Undertaker Making Return To WWE This Month At SmackDown - uSports.org 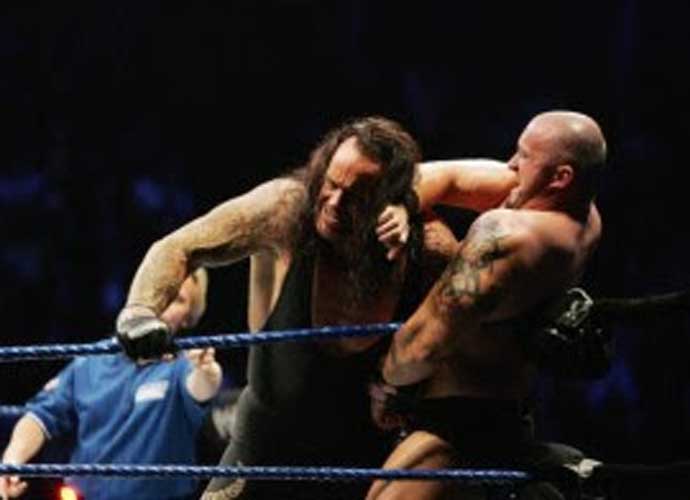 SYDNEY, AUSTRALIA - JUNE 15: The Undertaker (L) pushes Bam Neely into the corner during WWE Smackdown at Acer Arena on June 15, 2008 in Sydney, Australia.

The Undertaker Making Return To WWE This Month At SmackDown

The Undertaker made a surprise appearance last week at a Cleveland Cavaliers game in full attire, and on Wednesday it was announced the WWE legend will appear on SmackDown later this month.

The Undertaker Making Return To WWE This Month at smackdown

The Undertaker, born Mark William Calaway, made his last showing came at WrestleMania 32, where he defeated Shane McMahon in a Hell in a Cell match.

SmackDown will be held on Nov. 15 at Mohegan Sun Arena in Wilkes-Barre, Pennsylvania. The venue announced the 51-year-old wrestler’s appearance on Twitter, and he appears as a featured star scheduled to appear on the official WWE ticket page. That episode will be the 900th episode of SmackDown.

The Undertaker has been seen walking around on crutches, reportedly from a hip surgery he recently underwent. He shocked fans by showing up at Battleground 2015 to reignite his feud with Brock Lesnar ahead of SummerSlam.

Justin LaBar of Upgruv is already looking toward WrestleMania 33:

I’d go with Undertaker vs John Cena at WrestleMania 33 with stipulation of loser retires.

WWE fans will undoubtedly be delighted to hear that the towering man is returning to the arena.