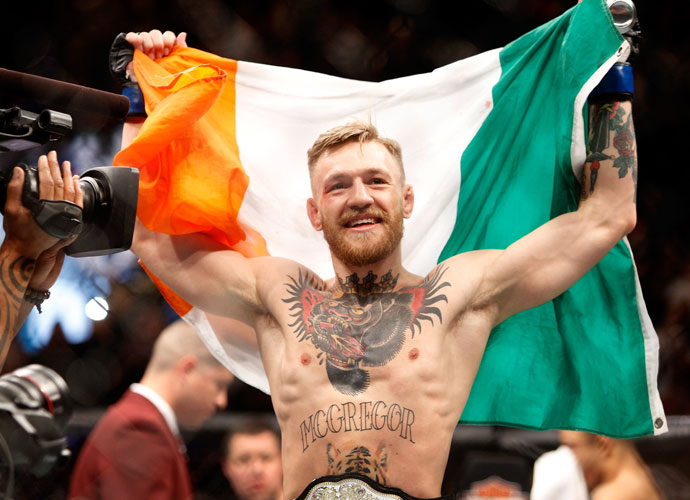 Featherweight Conor McGregor cashed in this week with a new six-fight UFC deal that includes the promotion of his whiskey.

Conor ‘The Notorious’ McGregor will return to the octagon after nearly two years of inactivity in a new six-fight deal with the UFC, president Dana White told ESPN on Thursday.

White didn’t disclose the terms of the deal but said it could earn McGregor the most money in the sport, given his pay-per-view appeal.

Per White, UFC 229 is currently trending towards 2.5 million pay-per-view buys. McGregor holds the UFC pay-per-view record of is 1.6 million buys for his rematch with Nate Diaz at UFC 202.

Besides the number of matches, the only thing we know about this deal is that it will include McGregor’s new whiskey, Proper Whiskey, as a sponsor in every UFC event in which McGregor competes.

“You bet your bollocks it is,” McGregor said when asked if the logo of his product will have a presence in the octagon. “On the canvas. Like [Khabib Nurmagomedov’s] blood will be on the canvas.”

In May 2018, UFC completed a domestic media rights agreement with ESPN valued at $1.5 billion over a five-year term ($300 million-per-year for digital and linear rights). The agreement nearly doubles the amount paid from their previous seven-year contract with 21st Century Fox.

As the UFC prepares to head into a deal that White described as the “most monumental thing to happen in the history of this sport,”  it’s clear that McGregor will play a significant role in the long-term plans for the promotion and the sport of mixed martial arts.

McGregor’s first matchup will be at UFC 229 on Oct. 6 against UFC lightweight champion Nurmagomedov. His last fight was against Eddie Alvarez in November 2016, which ended in a second-round TKO. He was stripped of the lightweight belt because of inaction, and Nurmagomedov took over the title on April 8 with a win over Al Laquinta.