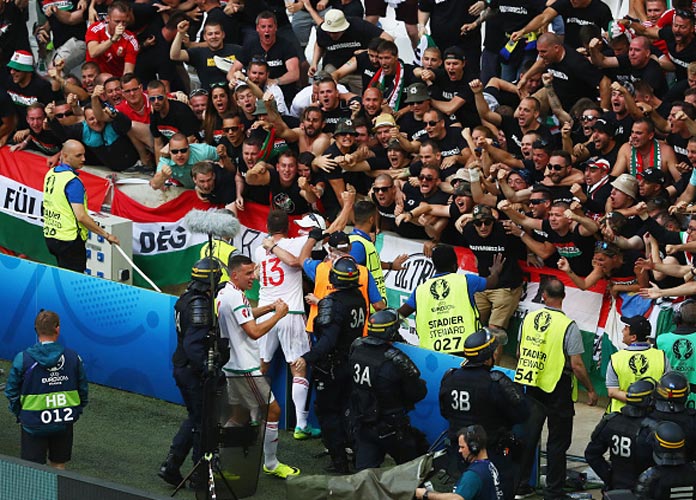 MARSEILLE, FRANCE - JUNE 18: Hungary players celebrate with fans as Birkir Saevarsson of Iceland scores an own goal for their first goal during the UEFA EURO 2016 Group F match between Iceland and Hungary at Stade Velodrome on June 18, 2016 in Marseille, France. (Photo by Alex Livesey/Getty Images)

The Union of European Football Associations (UEFA) has launched disciplinary cases against Hungary, Belgium and Portugal in the latest charges over fan violence at the Euro 2016 Cup, a soccer tournament that has been marred by international fan fights since its opening week.

The association announced the latest disciplinary proceedings on Sunday after another round of crowd violence during Saturday’s matches.

The Hungarian Football Federation now faces charges after its fans set off fireworks and threw objects before and during its game against Iceland at the Stade Velodrome in Marseilles on Saturday, a game which ended in a 1-1 draw.

Supporters also clashed with riot police and match stewards inside the stadium. A hearing has been setting for June 21.

VIDEO: Fans #clash with police in stadium ahead of #Iceland v #Hungary in #Marseilles https://t.co/hEGGXrrL6f pic.twitter.com/4LtOkivJLL

Riots also broke out in Bordeaux when Belgian fans set off fireworks and hurled objects during the country’s 3-0 group E victory over the Republic of Ireland.

Portugal, meanwhile, also faces disciplinary action over a fan field invasion during their 0-0 tie with Austria in Paris.

Aww, Cristiano Ronaldo held off security to take a selfie with a fan who ran onto pitch. https://t.co/gUMdPNrV9X

UEFA has opened cases against the football associations of Belgium and Portugal, although no date has yet been set for a Control, Ethics and Disciplinary Body meeting in either case.

The latest disciplinary proceedings follow UEFA’s confirmation of a case against the Croatian Football Federation after its fans threw at least 15 flares onto the pitch and began fighting towards the end of their national team’s 2-2 draw with the Czech Republic on Friday.

The game was stopped with four minutes left to play after both a steward and Croatian forward Ivan Perisic were nearly hit by firecrackers.

Supporters were also accused of “racist behavior” in the UEFA disciplinary announcement. The Croatia hearing will be heard Monday.

Finally, Turkey was also charged Saturday over its own fans setting off fireworks and hurling objects as well as storming the field during the team’s 3-0 loss to Spain in Nice, although no date has yet been set for the UEFA hearing in that case.

In total, 11 disciplinary cases have now been opened by UEFA over fan misconduct. Within days of the tournament’s start on June 10, 11 fans had already been arrested, charged and sentenced for participating in clashes ahead of games in Marseille.

Thus far, sanctions have only been issued against the Russian Football Union following crowd disturbances, use of fireworks and racist behavior during its matchup against England on June 11 in Marseille.

The Russian sports body was issued a €150,000 fine as well as “suspended disqualification.”

MARSEILLE, FRANCE – JUNE 18: Hungary players celebrate with fans as Birkir Saevarsson of Iceland scores an own goal for their first goal during the UEFA EURO 2016 Group F match between Iceland and Hungary at Stade Velodrome on June 18, 2016 in Marseille, France. (Photo by Alex Livesey/Getty Images)

Read more about:
Euro 2016 fan violence Marseille sanctions UEFA
Listen to the uInterview Podcast!
Get the most-revealing celebrity conversations with the uInterview podcast!