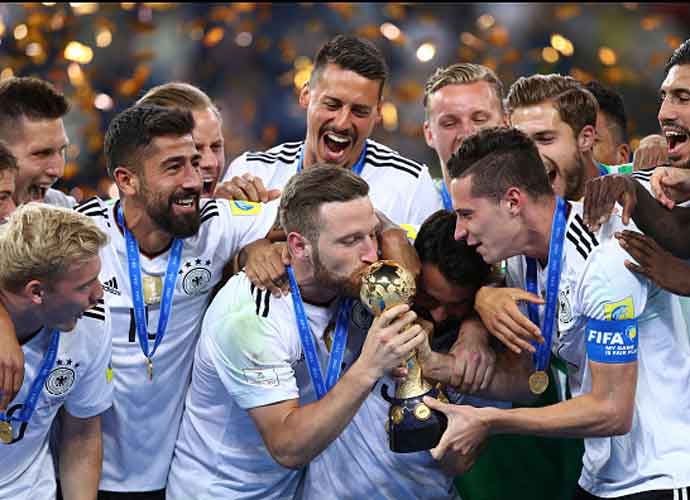 FIFA and UEFA have suspended all Russian international and club teams from competitions “until further notice,” the pair announced in a joint statement Monday.

The world’s governing soccer body, FIFA, and European’s, UEFA, said that each’s presidents—Gianni Infantino and Aleksander Čeferin, respectively—“hope that the situation in Ukraine will improve significantly and rapidly so that football can again be a vector for unity and peace amongst people.”

UEFA’s competitions include the men’s and women’s Champions League, the men’s Europa League and the men’s UEFA Conference League.

Spartak Moscow was set to play RB Leipzig in the Europa League, with the first leg in Germany on March 10 and the second leg March 17, but that tilt has now been ixnayed.

“The UEFA Europa League matches between RB Leipzig and FC Spartak Moskva cannot take place, and, as a consequence, RB Leipzig are qualified to the quarter-finals of the competition,” UEFA said in a statement.

There are no Russian teams left in UEFA’s other club competitions this year.

FIFA’s jurisdiction means that, as it stands, Russia will not be able to compete in its World Cup playoff against Poland on March 24.

That was originally set to take place in Russia until FIFA said Sunday that Russia must play all upcoming international matches on neutral sites sans fans with the moniker “Football Union of Russia,” following the invasion of Ukraine.

“Following the initial decisions adopted by the FIFA Council and the UEFA Executive Committee, which envisaged the adoption of additional measures, FIFA and UEFA have today decided together that all Russian teams, whether national representative teams or club teams, shall be suspended from participation in both FIFA an UEFA competitions until further notice,” said Monday’s joint statement.

“These decisions were adopted today by the Bureau of the FIFA Council and the Executive Committee of UEFA, respectively the highest decision-making bodies of both institutions on such urgent matters.

“Football is fully united here and in full solidarity with all the people affected in Ukraine.”

Read more about:
FIFA Russia UEFA Ukraine
Listen to the uInterview Podcast!
Get the most-revealing celebrity conversations with the uInterview podcast!