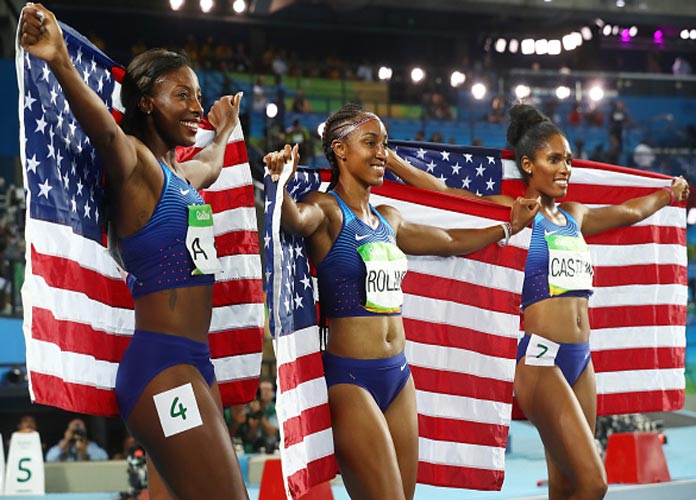 Three U.S. women made history in Rio on Wednesday night, placing 1-2-3 in the 100-meter hurdles in the first time ever that American women have swept an Olympic track and field event.

The U.S. has medaled in five consecutive Olympic Games in the event. The three medals capped off a seven-medal day for U.S. track and field, which also included a 1-2 finish in the long jump.

Tianna Bartoletta, who turns 31 later this month, managed to power past 2012 Olympic gold medalist and USA teammate Brittney Reese in the long jump.

“It was an awesome hour, for sure,” Bartoletta said. She previously won world championships in 2005 and 2015.

It was an extra special day for Rollins, who turned 25 on Thursday (Aug. 18).

“I knew that I got the gold,” Rollins said. “But I just wanted to make sure that my other teammates medaled as well.”

She and her two teammates leaped for joy, holding up the American flag, and then came together for a long embrace.

“We’ve talked about it, but it’s not something that we focused on,” Rollins added. “We just wanted to focus on being our best, and being our best would get us on the podium.”

Earlier in the evening, Elaine Thompson got another sprint double for Jamaica. She blasted out of the blocks and eluded Dutch sprinter Dafne Schippers on the 200 meters.

After winning the 100 on Saturday, Thompson now has a double that compatriot Usain Bolt has specialized in. Thompson can make it triple gold during the relay races Thursday and Friday.

The back-and-forth between Bartoletta and Reese was captivating. On her fifth of six attempts, Reese, the favorite, leaped a stunning 7.09 meters. Bartoletta responded with a 7.17-meter jump.

“To win that medal after all that time, and still be here and be a more mature athlete, a more serious athlete, more deliberate in my approach to the sport, more businesslike,” Bartoletta said, “it’s really validating for sure.”

Rollins and her teammates, meanwhile, are very close. “It’s like a sisterhood,” she said. They also compete in an event that is so tightly contested in the U.S. that the woman who finished sixth at trials, Kendra Harrison, responded to that disappointment — and resulting failure to make the U.S. team — by setting the world record in the event at a July meet in London.

“It just shows you how strong our event is,” Rollins said.