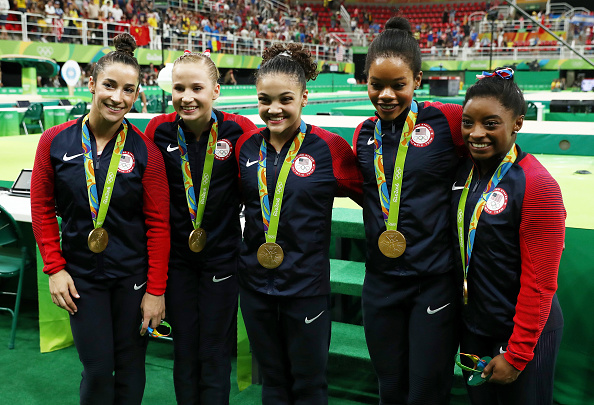 The team of Biles, Aly Raisman, Laurie Hernandez, Gabby Douglas and Madison Kocian delivered as prohibitive favorites by earning the highest total score in every event. Russia finished as the runner up, and China won bronze. The U.S. won by a stunning eight points.

The U.S. began with the vault. Two gymnasts, Raisman and Biles, tried the challenging Amanar, in which the athlete does two and a half twists with a blind landing. Raisman scored a 15.833, and Biles scored an even more impressive 15.933, despite making a hop on her landing.

After one rotation, the U.S. was already ahead, leading Russia– who performed on the bar– by 0.7 points.

The bars were the single opportunity of the day to perform for Douglas, the 2012 all-around champion, and Kocian, a bars specialist and a 2015 world champion in the event. Both performed fantastically. Douglas got great height on her release skills and hit her handstands, then stuck her double layout dismount to finish with a 15.766. Kocian performed one of the most difficult routines at the Games, and nailed it, scoring a stellar 15.933.

The Americans thus extended their lead over China to a comfortable four points, while Russia fell to third.

Then, on the occasionally perilous beam, the U.S. team suffered no mishaps. Raisman hit her full twisting double arabian landing for a 15.0, and Hernandez gave a solid performance for a 15.223. The unstoppable Biles survived a balance check and made only a small hop on her dismount, one of the most difficult in the world, a full-twisting double tuck for a 15.3.

Since they were the top qualifiers, the Americans got to end on floor exercise. This was considered an advantage because the Americans’ floor scores usually tend to be high, and crowd support for the floor is huge. But with a nearly five-point lead over China, this advantage was not even necessary.

Hernandez gave her typical stellar performance. The scoring system tends to favor difficult tumbling over choreography. Hernandez, however, has contributed to bringing artistry and dance back into American gymnastics, to the applause of many.

Biles’s second tumbling pass includes a double layout with a half-twist and a blind landing, a move nicknamed the ‘Biles’ because she was the very first gymnast to land it in competition.

Fantastic performances like these have come to be expected from the American women’s team.