Two Teams Reach Out to Rob Gronkowski About NFL Return – But Will He Comeback Again? - uSports.org 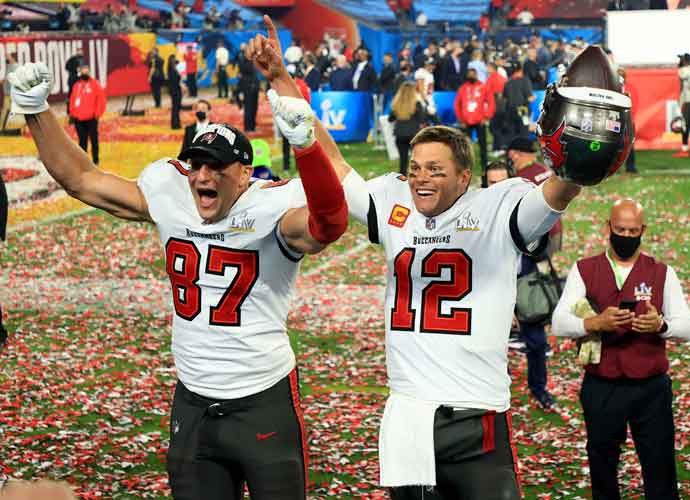 Two Teams Reach Out to Rob Gronkowski About NFL Return – But Will He Comeback Again?

Teams have expressed interest in signing Rob Gronkowski – but it’s unlikely that’s he seriously he considering a return, at least for the moment.

The speculation started when the 33-year-old sent out a tweet this week that said “I’m kinda bored.”

Not only did fans go wild over it, but even the NFL’s official account replied with an eyeball emoji.

Soon after, Gronkowski made an appearance on FanDuel’s Up & Adams podcast and claimed that he was contacted by two NFL teams.

“It was unbelievable. I won’t say who,” he said.

“It was pretty nuts to me that everyone saw the tweet. It shows how far social media can go and how quickly it can travel.”

But the tweet wasn’t intended to tease a comeback.

Instead, it was for his new deal with FanDuel.

In his Twitter announcement of the official news, Gronkowski did a little trolling skit in a video since the tweet took off.

But then added he was “just kidding,” while eating a bag of potato chips and then announced the FanDuel news.

While Gronkowski will be signing a new deal, it doesn’t mean he can’t decide to return to the NFL at any time if he wants to.

The former star tight end first decided to hang up the cleats following the 2018 season.

Then after getting kind of bored, Gronkowski came back to play with Tom Brady and the Tampa Bay Buccaneers for a couple of seasons.

He retired again this summer.

Throughout his football career, Gronkowski has battled a variety of injuries including what he has estimated to be 20 concussions and at least nine surgeries.

In the NFL, Gronkowski has recorded nearly 9,300 receiving yards with 621 catches.

Gronkowski will be eligible for the Pro Football Hall of Fame in 2027.

But if he decides to come back again, it remains to be seen if will sign a deal to play with Brady or elsewhere.

Buccaneers head coach Todd Bowles said that Gronkowski recently called the team about potentially joining the playoff push – but nothing came to fruition.

Read more about:
Rob Gronkowski Tampa Bay Buccaneers
Listen to the uInterview Podcast!
Get the most-revealing celebrity conversations with the uInterview podcast!