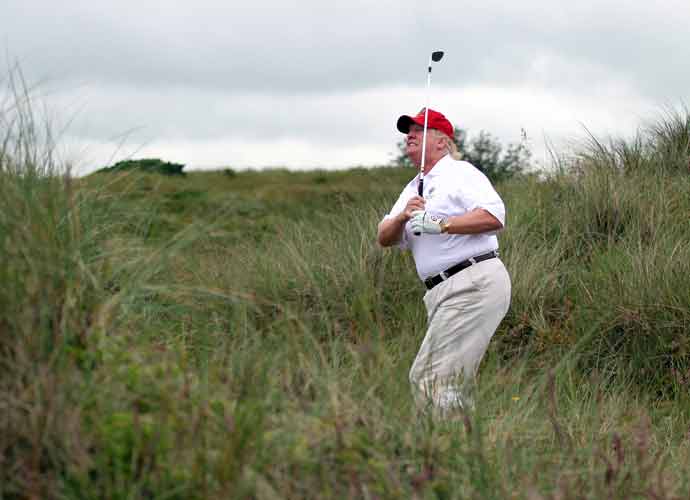 Full view ABERDEEN, SCOTLAND - JULY 10: Donald Trump plays a round of golf after the opening of The Trump International Golf Links Course on July 10, 2012 in Balmedie, Scotland. The controversial £100m course opens to the public on Sunday July 15. Further plans to build hotels and homes on the site have been put on hold until a decision has been made on the building of an offshore windfarm nearby. (Photo: Getty)

Former President Donald Trump claims to have hit a hole-in-one at his Florida golf course while playing a round with former world top golfer Ernie Els.

The shot was said to be hit on Saturday on the par-three 7th at the Trump International, West Palm Beach.

The news comes on the heels of a federal judge saying Trump likely committed felonies during his attempts to overturn the presidential election. In addition, the House January 6 committee recommended criminal contempt charges for Dan Scavino and Peter Navarro, two of his aides.

“Many people are asking, so I’ll give it to you now, it is 100% true,” Trump said Monday. “While playing with the legendary golfer, Ernie Els, winner of four majors and approximately 72 other tournaments throughout the world, Gene Sauers, winner of the Senior US Open, Ken Duke and Mike Goodes, both excellent tour players, I made a hole-in-one.

“These great tour players noticed it before I did because their eyes are slightly better, but on that one hole only, their swings weren’t.”

Els seemed to confirm the “news” with his tweet: “Great shot on Saturday 45! Fun to watch the ball roll in for a hole-in-one.”

Great shot on Saturday 45! Fun to watch the ball roll in for a hole-in-one.