Trevor Lawrence Struggles In Debut With Jaguars In Loss To Texans - uSports.org 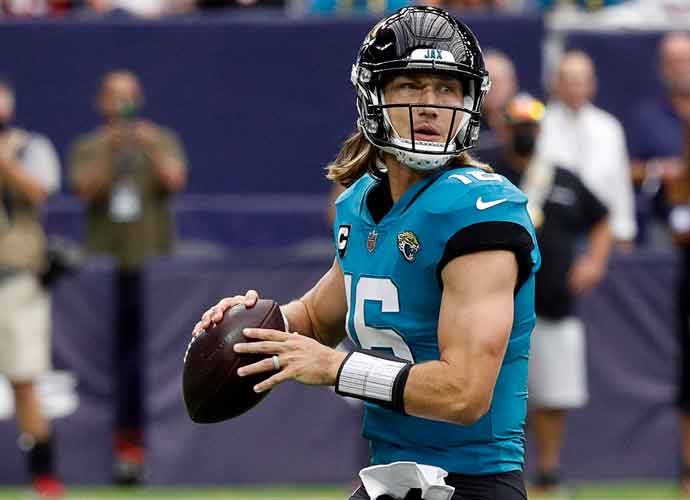 HOUSTON, TEXAS - SEPTEMBER 12: Trevor Lawrence #16 of the Jacksonville Jaguars throws a pass in the first quarter against the Houston Texans at NRG Stadium on September 12, 2021 in Houston, Texas. (Photo by Bob Levey/Getty Images)

There is no easy way to say it – the Jacksonville Jaguars had an ugly Week 1 against the Houston Texans. In a 37-21 loss, highly touted rookie Trevor Lawrence ended the day with 332 yards paired with three touchdowns and three interceptions. Lawrence was fairly mediocre and at the end of the day he had some concerning overthrown balls, but the coaching, offensive line play and drops certainly didn’t help.

Early in the game, the Jaguars’ defense let Brandin Cooks get over the top putting the Jaguars down 14-0 entering the second quarter. After a few drops into the first drive and an illegal formation flag, Lawrence stood tall and threw his first touchdown of his NFL career. Lawrence was looking poised in the pocket despite the pressure as he was attempting to end the half on a positive note since the game was still in reach at 17-7 but nothing seemed to go right as the offensive line got hit with another illegal formation and an offensive hold on the same play. His right tackle was lined up too far into the backfield putting them at second-and-long. It was at that moment when Lawrence threw his first interception. The QB simply let this one get away from him. As he was rolling outside, trying to make a hard throw look easy, he overthrew to his receiver.

He seemed to be getting outside the pocket pretty often throughout the game and overthrowing the ball was a constant theme. This throw was to DJ Chark and Lawrence actually had a clean pocket, but the ball just got out of his hand a little too early, causing it to fly as he attempted to drop it in over the weakside linebacker.

These are not easy throws, so it was good to see him try. His second interception came when he telegraphed the pass with his eyes to his receiver and cornerback Vernon Hargreaves, who made a great play on the ball ending up with the interception. It wasn’t long before Lawrence was just doing anything to get out of the quicksand as Urban Meyer forced Lawrence to throw a whopping 51 attempted passes. The run game seemed non-existent against the Texans.

For Lawrence to be successful going forward, utilization of last year’s star running back James Robinson will be absolutely necessary. He had less than ten touches, which isn’t a promising sign about the team’s offense going forward.