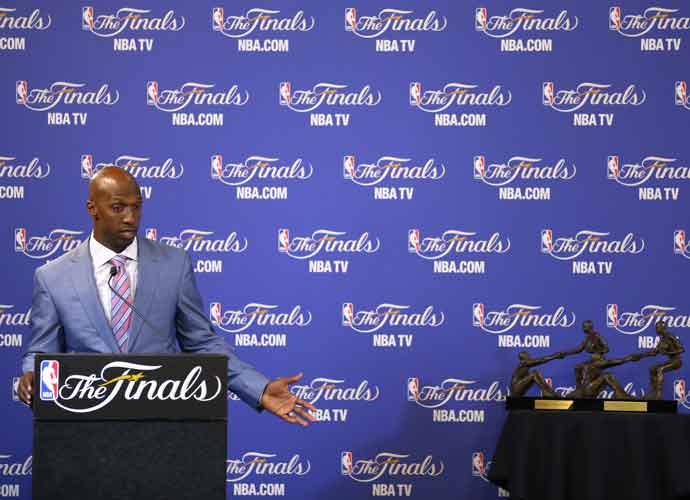 MIAMI, FL - JUNE 09: Chauncey Billups addresses the media after winning the Twyman-Stokes Teammate of the Year Award in honor of Jack Twyman and Maurice Stokes before Game Two of the 2013 NBA Finals between the Miami Heat and the San Antonio Spurs at AmericanAirlines Arena on June 9, 2013 in Miami, Florida. NOTE TO USER: User expressly acknowledges and agrees that, by downloading and or using this photograph, User is consenting to the terms and conditions of the Getty Images License Agreement. (Photo by Streeter Lecka/Getty Images)

We have named Chauncey Billups as our head coach.

“Chauncey is a proven leader with an elite basketball IQ that has won everywhere he has been,” Neil Olshey, president of basketball operations said. “He is prepared for the challenge of developing the Championship habits and strategic approach we need to achieve the expectations and goals for our franchise.”

Billups will be introduced at a team news conference in Portland. Billups was offered the job on Friday night, and the sides had been progressing on a deal to replace former coach Terry Stotts over the weekend. Olshey and Billups’ agent, Andy Miller of Klutch Sports, finalized the contract terms on Sunday. The deal is for five years and includes a team option on the last season.

Portland’s move to hire Billups is a clear effort from the franchise to maximize superstar Damian Lillard‘s prime years. Under former coach Sotts, the Trail Blazers only advanced to two conference semifinals and a conference final appearance.

Before making a formal offer on Friday night, Portland continued investigating a 1997 rape allegation against Billups. No criminal charges were brought, but Billups settled a civil lawsuit filed by the woman.

Billups will be tasked with helping to shape a Trail Blazers defense that ranked amongst the worst in the league. The newly hired coach will expect to continue building on the team’s top offense of Lillard and CJ McCollum.

“Portland is a special place and a unique franchise,” Billups said in a statement. “As a player, I always loved playing here because the passion and knowledge of the fans brought out the very best in me as a competitor. Now I’m looking forward to being on the other side of that energy and engaging with the Portland community on a whole other level.”