Top 5 MLB Games to Watch This Weekend - When & Where To Watch [PREDICTIONS] - uSports.org 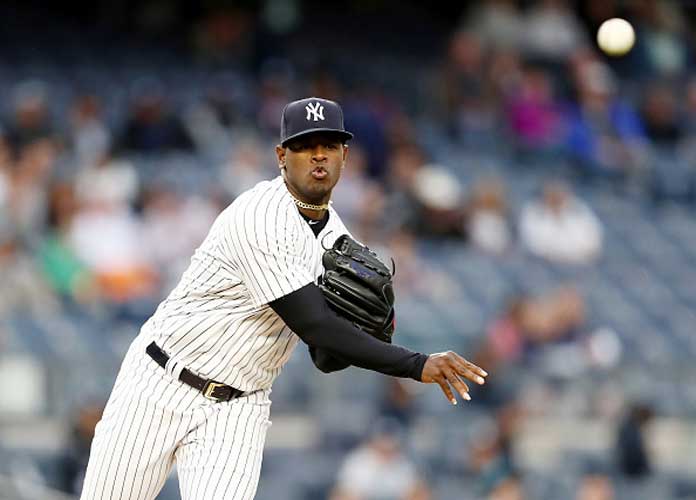 NEW YORK, NY - APRIL 13: Luis Severino #40 of the New York Yankees tries to pick off Kevin Kiermaier #39 of the Tampa Bay Rays at first base on April 13, 2017 at Yankee Stadium in the Bronx borough of New York City. (Photo by Elsa/Getty Images)

The 2018 MLB Draft has come and gone, having concluded this past Wednesday. While we, the fans, won’t be seeing these new prospects take the field in the Majors just yet, this weekend will give them their first taste of exactly what type of organization they’ll be joining. We’ve all got some great games going on this weekend, and here are the five which are most worth your time.

The defending world champs are always going to warrant a large audience, but especially so when it’s their best pitcher taking the mound. Justin Verlander has been absurdly brilliant this season, leading the Majors in both ERA and WHIP, having yet to allow more than 3 runs in any of his starts this season. In fact, all but one of his starts all year has been a quality start (at least 6 innings pitched while giving up 3 runs or less), and he was only an out away from notching a QS in that one as well. Couple Verlander with one of the MLB’s best offenses and you have arguably the most difficult obstacle for any opposing team to conquer. The only “if” here is whether or not Astros shortstop Carlos Correa will be ready to play, as he is currently listed as day-to-day following an optimistic MRI on his right side. Nonetheless, Verlander is the big draw here, and this game is not entirely likely to be all that competitive considering the fact that Texas is sitting in last place in the AL West, but it’s always fun to see the most probable Cy Young candidate work his magic.

Sticking with the ultra-competitive AL West, the Angels have consistently been one of the most exciting teams to watch this year. Led by what looks to be a historic season by outfielder Mike Trout (who is on pace to have a higher WAR at the end of this season than any other player in Major League history has ever had in one year) and the continued excellence of two-way Japanese rookie Shohei Ohtani, LA has produced as much must-watch baseball as any other team this season. With Ohtani not set to make a pitching start until after this weekend, we’re all but guaranteed to see him take the DH spot in the middle of the Angels’ batting order, which is always a site to see. The Angels are 4.5 games behind the Mariners for the top spot in the AL West, putting them in third place in the division, and Minnesota just so happens to be in the same situation, albeit in the much more lackluster AL Central. Nonetheless, they’re still within striking distance of the division lead, but don’t expect them to shoot up the standings this weekend.

If it weren’t for the amazing play of the Astros’ rotation, James Paxton would likely be in the AL Cy Young conversation right now. While that’s not the case, he can’t be too upset, considering his Mariners possess the MLB’s third-best record and sit atop the AL East. They’ve be blazing hot through May and June, which is made all the more impressive due to the fact that they lost second baseman Robinson Cano due to a drug-related suspension. In fact, since Cano’s last game on May 13, Seattle has gone 16-6 and is showing no signs of slowing down any time soon. That’s a pretty fantastic thing to accomplish without arguably your best offensive player. The Rays, on the other hand, are looking to snap a 7-game losing streak, and are hoping Nathan Eovaldi can make that happen. However, he’s only made two starts this season, throwing over 11 total innings and recording 8 strikeouts, so it’s tough to really be able to predict how he’ll pitch against such a hot team.

Similarly to Friday’s Houston-Texas matchup, Sunday’s Giants-Nats game will feature one of the game’s best arms taking the mound to continue his dominance this season. Max Scherzer has been excellent this season, leading the Majors in wins and strikeouts, while only ranking behind Justin Verlander and Jacob deGrom in strikeouts among qualified pitchers. Perhaps his most impressive statistical feat this season, though, is that fact that the batting average which he has allowed to opponents this season sits at .171 (leading the Majors), while Scherzer himself has hit for a .281 batting average. While the latter number is not likely to stick for very long, Scherzer could very well have a higher batting average than opposing batters by the end of the season. Considering he’s not exactly the best hitting-pitcher in the game, that’s pretty astounding, and is sure to provide even more help in garnering his fourth Cy Young award. While the Giants are almost sure to have a rough time facing Scherzer, they’ve got plenty to play for, as they’re only 1.5 games back from the top spot in the NL West, and with their rival Dodgers finally gaining some steam, they’re going to need every win they can get. While they’ll probably snag one in this series, it most likely won’t be in this particular game.

New York’s Subway Series is always a ton of fun, but even more so when its conclusion is a matchup between both teams’ aces. 24-year-old Luis Severino has firmly established himself as a legit star pitching in the Majors, sitting at 9 wins (tied for second in the Majors with Corey Kluber), and sixth in both strikeouts and ERA. On the other side, Noah Syndergaard is consistently one of the best pitchers in baseball…when he’s healthy. Sunday’s start will be Syndergaard’s first after returning from a brief stint on the DL, but he insists that he is not having any trouble whatsoever with his injured finger, which is obviously a huge plus for the Mets moving forward. With this game being a matchup between two of baseball’s elite pitchers, its result could come down to which offense can manage to sneak a couple of runs on the board, which will most likely be the Yankees, who currently own the best record in the Majors at 40-18, ranking only behind the Red Sox in runs scored this season. Finally, making this series all the more special is that there really isn’t any home field advantage considering Yankee Stadium and Citi Field are only a few miles apart and can be accessed easily by, well, the subway. Expect a fairly evenly matched game with lots and lots of swinging misses.