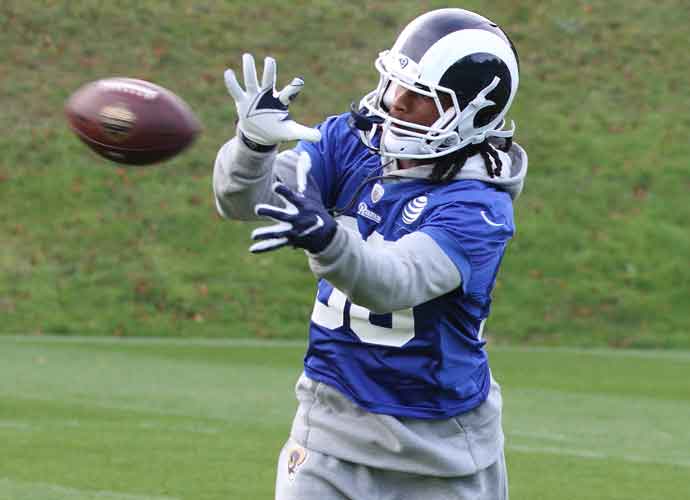 Although he’s usually found trotting up and down the football field while embarrassing defenders for the Los Angeles Rams, during the team’s run to the Super Bowl last year, star running back Todd Gurley spent the occasion hobbling across the sideline instead, nursing an inopportune knee injury.

Looking to return to his game–changing level, Gurley continues to take this offseason day by day, rehabbing his injury and healing up. Gurley, who also tore his ACL during his final collegiate year at Georgia, recently commented on his knee as he stated, “It’s good, man. It’s good. I’m just like, hey, we’re going to find out in training camp, ya know? Once training camp comes, you’ve got the preseason, but you don’t have a lot in preseason.”

Quote from Todd Gurley on his knee via @OmarDRuiz: “It’s good, man. It’s good. I’m just like, hey, we’re going to find out in training camp, you know?”

Gurley’s generally positive, yet somewhat vague comments surely warrant continuing concern for the Rams, who agreed with Gurley on a $57 million contract extension last year. Gurley’s health remains the only question when debating the contract’s beneficence, as Gurley rushed for 3,924 yards from scrimmage over the last two seasons. The next closest player to Gurley resides 700 yards behind him, despite Gurley’s missing three games over the time span.

Meanwhile, Gurley continues to sit out all voluntary offseason programs with what his trainer describes as an “arthritic component” Most speculate head coach Sean McVay plans to limit Gurley in training camp while possibly working him into preseason action slowly due to the concerns surrounding Gurley’s health. “I’m just going to keep doing what I can do until I can’t do it no more. That’s why we play this sport. But I’ve been feeling good,” said an eager Gurley. “I’m gonna try to go get it. So I’m just excited. I know it’s always been a lot of talk going on this whole offseason, so it’s just like, hey, it’s the offseason. That’s what everything is supposed to be about: speculation and reporting. Once the season comes, you gonna see what happens.”

Sean McVay says Todd Gurley hasn’t been doing any work on the field during team drills at OTAs, but has been a consistent participant in the offseason program.
“We’ve got him on a great plan.”

Although Gurley’s position as the team’s starting running back remains entirely secure, the Rams selected Darrell Henderson with a third round pick during this year’s draft. The team likely plans to utilize Henderson as a backup incase Gurley faces further setbacks ahead the upcoming season and to potentially ease the heavy workload Gurley carriers, a workload which may even stand responsible for his current injury.

As arguably the best player aboard the defending NFC champions last year, Gurley operates as an instrumental piece to not only his team’s success, but also those looking to draft him to their fantasy football team, promoting his knee health as a top story to follow as the offseason progresses.

Todd Gurley was the top RB/WR #FantasyFootball scorer in standard leagues last season – but just how did the race for No. 1 transpire?

Here’s an infographic that breaks it all down (Source: Pro Football Reference): pic.twitter.com/lEBe0MAKkE