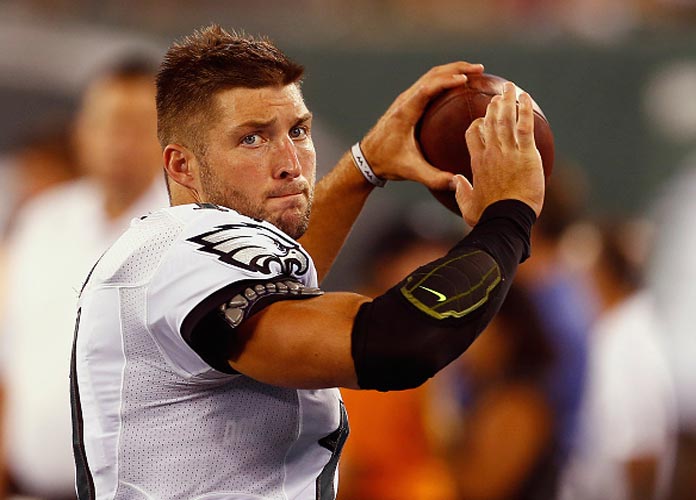 EAST RUTHERFORD, NJ - SEPTEMBER 03: Quarterback Tim Tebow #11 of the Philadelphia Eagles warms up on the sidelines against the New York Jets in the third quarter during a pre-season game at MetLife Stadium on September 3, 2015 in East Rutherford, New Jersey. (Photo by Rich Schultz /Getty Images)

Tim Tebow is now an official member of the Jacksonville Jaguars. This comes as Tebow signed a contract with the team on Thursday morning.

Tebow won the Heisman Trophy as a quarterback with the University of Florida. Urban Meyer, who coached Tebow during his 2007 Heisman season, was recently hired as the head coach of the Jaguars.

Tebow will participate in offseason activities with teammates until OTA workouts commence on Monday.

“I want to thank the Jaguars for the opportunity to compete and earn the chance to be part of this team,” said Tebow. “I know it will be a challenge, but it is a challenge I embrace. I am dedicated to taking the direction of our coaching staff and learning from my teammates.”

Meyer told Cris Collinsworth, “There’s a thought going around. He was in the best shape of his life, asked to see if he could work out with a couple of our coaches.” Meyer stated that he wasn’t even present for the workout. “They came back to me and said ‘Wow, this guy’s in incredible shape.’ Then I went another time and watched him try out,” the coach added. Meyer explained that Tebow worked on certain aspects of his game as recommended by the Jaguars, and came back looking even better than before. The coach tabbed Tebow as a “competitive maniac” and said that they would “give it a shot.”

Tebow has not competed in an NFL contest since 2012 when he was a member of the New York Jets. Tebow will reportedly try out as a tight end, a switch many critics recommended over a decade ago. This signing likely occurred as a result of a lacking tight end corps in Jacksonville along with Tebow’s strong workout performance.

Tebow, despite his high profile, is by no means a lock to make the final roster. Around 90 players are signed by a team in June, with many of them being cut by the end of summer. This signing has sparked outrage among critics of Tebow, but in reality, even if he makes the final roster, he likely won’t see a lot of playing time. This is definitely a situation to monitor.