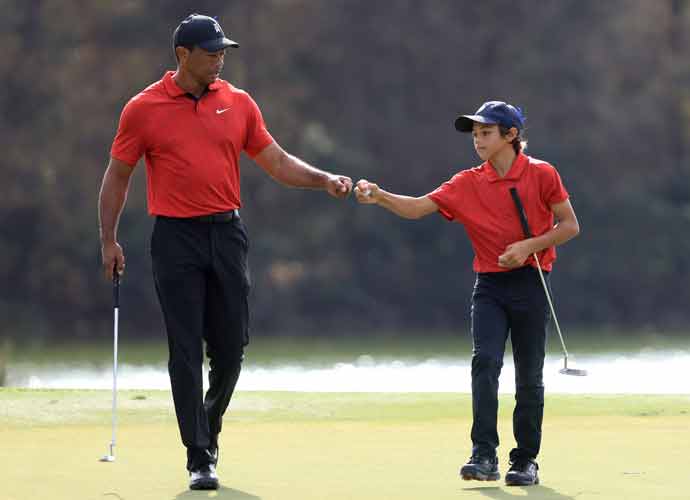 ORLANDO, FLORIDA - DECEMBER 19: Tiger Woods and Charlie Woods celebrate a birdie on the 13th hole during the final round of the PNC Championship at the Ritz Carlton Golf Club Grande Lakes on December 19, 2021 in Orlando, Florida. (Photo by Sam Greenwood/Getty Images)

There’s no better story this week than Tiger Woods‘ return to the golf course at the PNC Championship in Orlando with his 12-year-old son, Charlie Woods. The PNC Championship provides the chance for 20 Major Champions to team up with a member of their family to play golf.

Charlie proved to be the spitting image of his famous father both in looks and in mannerisms. Both wore Woods’ signature red polo and Charlie even has down the signature club twirl.

When Woods got into a bad car crash last February, there was no guarantee he would play golf again.

“The fact that I’m able to have this opportunity this year, even a couple of weeks ago we didn’t really know whether or not I would be doing this, but here we are,” Woods said. “And we had just the best time ever, and I just wish I could have walked down the fairways with him and been side by side with him the entire time like we were last year.”

Woods and Charlie came in second, just two shots behind John Daly and his son, John Daly II, who is a freshman on the University of Arkansas golf team.

Team Woods combined to shoot 15-under 57, including 11 consecutive birdies, an eagle and four pars.

Woods has not put a timeline on his return to the PGA Tour.

“I like competing,” Woods said. “I’m not going to play a full schedule ever again. I’m going to have to pick and choose what events, and even then, my body might not cooperate with that. So I don’t know how many events I’m going to be playing in. And it’s going to be up to training sessions, practice sessions, recovery tactics, all those different things to be able to do this again because it didn’t look good there for a while about it.”