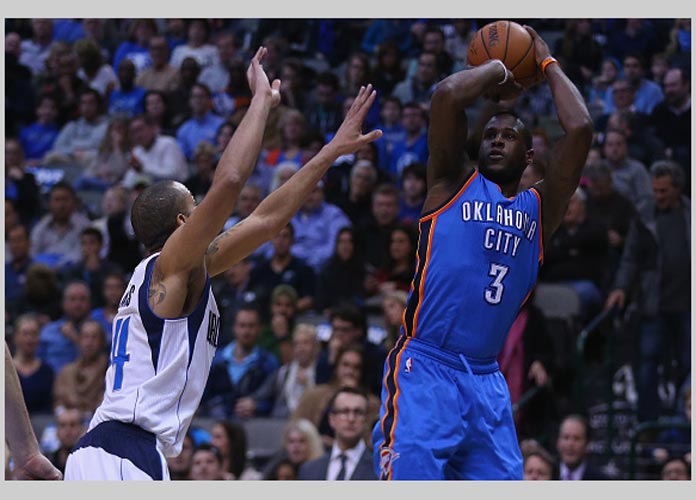 Caption:DALLAS, TX - JANUARY 22: Dion Waiters #3 of the Oklahoma City Thunder takes a shot against Devin Harris #34 of the Dallas Mavericks in the first half at American Airlines Center on January 22, 2016 in Dallas, Texas.

Oklahoma City Thunder guard Dion Waiters has left the team in order to join his family in mourning death of his younger brother Demetrius Pinckney, who died in Waiters’ hometown of Philadelphia on Tuesday.

Six people died in Philadelphia on Tuesday in six separate incidents in a span of nine hours, according to Philadelphia FOX affiliate WTXF-TV. No arrests have been made, and police have not yet stated whether he incidents could be related. One of the six victims, according to the network’s Steve Keeley, was Waiters’ brother.

Waiters took to Instagram to address his loss on Tuesday night.

“The call I just got about my lil brother wasn’t expecting this s—…..crushed my heart I never question why…. But this hurt…. I promise I got Yu mark my word….. Love Yu kid.. r.i.p.,” Waiters wrote as a caption for one of the two pictures.

Over in the city’s Grays Ferry section, 21-year-old Demetrius Pinckney was found dead in the 2300 block of Morris Street.

Police say he was found with severe injuries to the head, with a green dirt bike nearby.

Investigators also say a 20-year-old man was taken to the Hospital of the University of Pennsylvania by a private car, suffering a gunshot wound to the thigh and two gunshot wounds to the buttocks. He is listed in critical condition.

Police say there was some type of argument or disturbance that led to numerous dirt bike and ATV drivers chasing each other, and several gunshots were heard by witnesses.

Pinckney’s death is being investigated as a homicide.

Waiters was selected by the Cleveland Cavaliers as the No. 4 overall pick in the 2012 NBA Draft out of Syracuse. This is not the first time the guard has suffered personal loss. His older cousin, Antose Brown, was shot to death in 2006. A year later, his cousin Isiah Brown and best friend Rhamik Thomas were both shot on the street less than three months apart.

More recently, his cousin Carl Brown was killed in a motorcycle accident this past summer. Waiters says that was the hardest loss to deal with because it brought back memories of the previous deaths, but he adds, “I’m just happy I got the chance to say I love him before he passed.” Waiters then added, “The last three or four years have been hard with the losses,” Waiters says. “I can’t even explain how hard it’s been. I’ll never get over it.”

The entire NBA family sends thoughts and prayers to @dionwaiters3 and his family during this difficult time.

Waiters will not play in the Thunder’s Wednesday night game against the Los Angeles Clippers, who are currently 1.5 games behind Oklahoma City in the race for the No. 3 spot in the Western Conference Playoff bracket. Waiters has come off the bench for the Thunder for the last seven games, averaging 9.3 points, two assists and 1.7 rebounds in 27.9 minutes per game, while shooting 40.7 percent from 3-point range.

“We feel for Dion, that’s our brother,” Thunder star Kevin Durant said during Wednesday’s shootaround, according to Erik Horne of The Oklahoman. “It’s tough for anyone to go through that. We have his back on everything. He’s got our love and support. Just know we’re here for him. It’s tough getting the news yesterday about his brother.”

The Thunder organization has also suffered a series of tragic incidents. Ingrid Williams, the wife of associate head coach Monty Williams, died Feb. 10 after injuries suffered in a multi-car crash in Oklahoma City.

The call I just got about my lil brother wasn't expecting this shit…..crushed my heart I never question why…. But this hurt…. Love Yu kid.. 😔😔 r.i.p 😡

DALLAS, TX – JANUARY 22: Dion Waiters #3 of the Oklahoma City Thunder takes a shot against Devin Harris #34 of the Dallas Mavericks in the first half at American Airlines Center on January 22, 2016 in Dallas, Texas.