Theo Walcott Off To Strong Season After Scoring Two Goals in Arsenal's 2-0 Win Over Basel - uSports.org 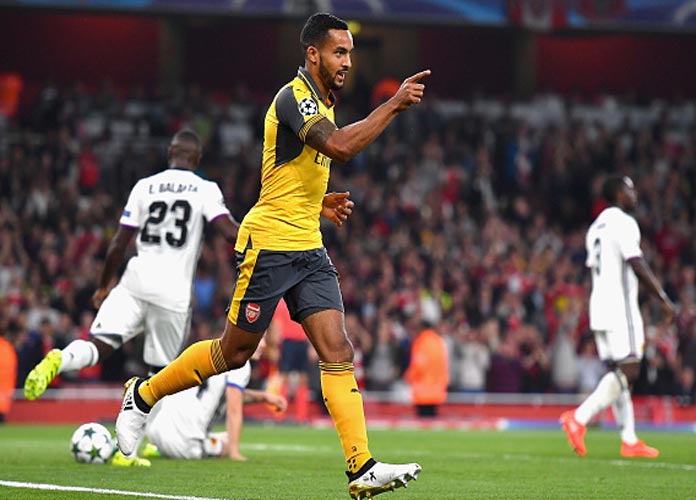 LONDON, ENGLAND - SEPTEMBER 28: Theo Walcott of Arsenal ceclebrates after scoring the opening goal during the UEFA Champions League group A match between Arsenal FC and FC Basel 1893 at the Emirates Stadium on September 28, 2016 in London, England. (Photo by Mike Hewitt/Getty Images)

After being omitted from England’s Euro 2016 team and at a standstill in his Arsenal career, Theo Walcott’s future seemed at best uncertain until the end of this summer.

Theo Walcott Off To Strong Season

Now, however, the 27-year-old forward has demonstrated how powerful an asset he can be. Walcott scored two first-half goals to lead Arsenal to a 2-0 home victory over Swiss team Basel in Wednesday’s Champions League match at the Emirates Stadium.

Arsenal’s Chilean forward Alexis Sanchez helped set up both of  Waltott’s finishes. The Englishman has now increased his total tally to five goals in seven appearances in all competitions, while manager Arsene Wenger’s team has now recorded four consecutive wins in all competitions.

“That combination between me and Alexis, it’s boding well but it’s obviously still very early into the season, so hopefully we can all stay fit and it’s going to be a good run,” Walcott told the club’s website.

“It’s getting a good sort of partnership there, but it’s not just that, the whole team seems to be clicking.

Waltcott has been with Arsenal since 2006, but has splayed sporadically for the Gunners since the beginning of the year, thus prompting rumors of him potentially being traded. He boasts over 200 appearances with the English club.

Inconsistency, a lack of end product and the inability to secure a regular starting spot have all plagued Walcott over the past decade. Nevertheless, Wenger, whose loyalty to his players has always been strong, decided to keep the player he signed as a teenager.

It seems strange that Walcott didn’t earn a spot on England’s Euro 2016 squad, despite the fact he scored nine goals in 42 appearances last season. However, the forward took advantage of the summer off to work on his fitness.

While Roy Hodgson’s team competed and eventually got eliminated by Iceland, Walcott began posting videos to his Instagram account showing off the extra work he’d been doing with fitness expert Bradley Simmonds to prepare for the new season.

With Joel Campbell on loan and Alex Oxlade-Chamberlain dealing with injuries, Walcott seized the opportunity to make a name for himself.

Walcott also scored a goal in the opening weekend’s 4-3 loss to Liverpool.

“Me and Hector Bellerin have got a good relationship on that right-hand side, it’s quite a pace-y right-hand side,” said Walcott. “I think the whole team tends to react well and defend well as a unit and clean sheets are going to win games because we’re going to score plenty of goals.”

The forward seems confident that he still has plenty to offer at the Emirates Stadium.

“I think the age I am, the experience I’ve had, the games I’ve had and the amount of goals I’ve scored this season is a different level,” Walcott continued. “I’m working hard, harder than I ever have and I just want to be the best I can. If I can do that it’s going to benefit the team.”

He also added: “I want to improve every day; going into work and being a better person and a better player as well and that’s just the way I am now. I always feel if I’ve done everything right in the week then come match-day I don’t have to think about anything at all because it’s all about the match and it seems to be going well at the moment.”

Arsenal will next face Burnley in Sunday’s Premier League game.

LONDON, ENGLAND – SEPTEMBER 28: Theo Walcott of Arsenal ceclebrates after scoring the opening goal during the UEFA Champions League group A match between Arsenal FC and FC Basel 1893 at the Emirates Stadium on September 28, 2016 in London, England. (Photo by Mike Hewitt/Getty Images)