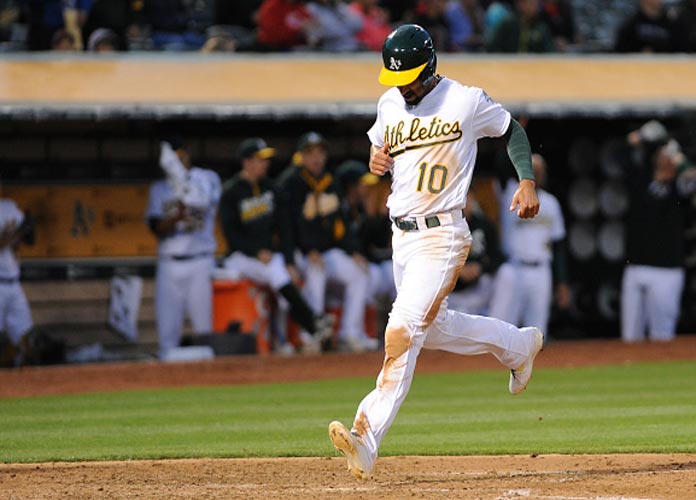 OAKLAND, CA - JUNE 13: Marcus Semien #10 of the Oakland Athletics scores on a Danny Valencia #26 RBI single against the Texas Rangers in the fourth inning at O.co Coliseum on June 13, 2016 in Oakland, California. (Photo by Robert Reiners/Getty Images)

Blockbuster deals are sending Marcus Semien and Corey Seager to Dallas, and when they say everything’s bigger in Texas, they must mean the contracts, too. Semien’s contract is good for $175 million over five years, and the Texas Rangers lockdown Seager in a massive ten-year, $325 million deal. The Rangers have made it clear they won’t be holding back on spending for talent after last year’s 102-loss season.

The shortened 2020 season affected athletes and Semien was no exception. He struggled with the Oakland Athletics that season which lead to a one-year stint with the Toronto Blue Jays. He moved from shortstop to second base and changed up his batting strategy. In a shift from the previous year where he chose to walk frequently, he became more aggressive on fastballs. Thirty-six of his 45 home runs were off fastballs. Semien is coming off an MVP-candidate year. He won both Silver Slugger and Gold Glove Awards and played in all 162 games for the second time in three seasons.

Seager was one of the most coveted free agents on the market. He has a career slash line of 297/.367/.504. In just a seven-year career, his accolades already include a National League Rookie of the Year Award, two NL Silver Slugger Awards, two All-Star selections, and NLCS and World Series MVP Awards. Injuries plagued him the last few seasons, but when healthy, Seager has proven to be incredibly consistent at-bat. His average has not dipped below .295 as a major leaguer. The Semien and Seager signings should help bring the Rangers back to relevancy next season.

Semien and Seager will be teaming up with recent additions Jon Gray coming from the Colorado Rockies and Kole Calhoun from the Arizona Diamondbacks. The Rangers are eager to secure players (pending physicals) with a possible MLB lockout since the collective bargaining agreement is set to expire on Wednesday at midnight.