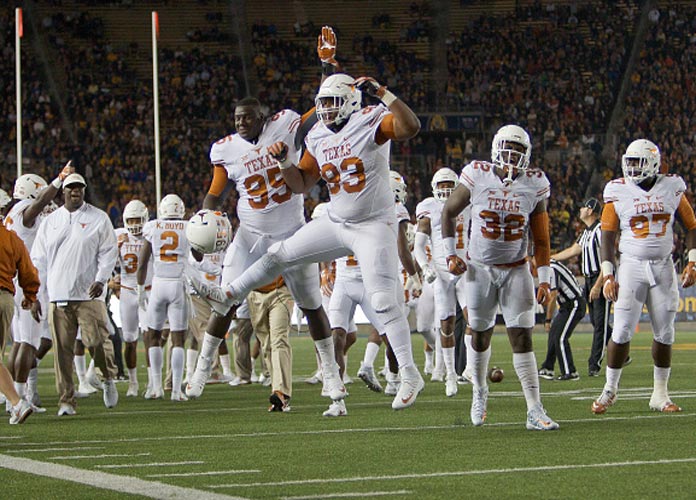 University of Texas senior football player Kent Perkins was charged with driving while intoxicated after he was arrested early Friday in Downtown Austin, police stated.

KVUE-TV reported that the Longhorns offensive lineman, who is from the Lake Highlands area of Dallas, was detained early Friday morning at 18th and San Antonio streets.

A constable told police he found Perkins asleep in his car in the drive-thru line of Raising Cane’s at around 3 am. The constable ordered the athlete to move his car, as Perkins was blocking the line into the fast food restaurant.

The constable stated that about 10 seconds later, he heard a loud crash just down the street. The constable walked to the parking lot at 18th Street and San Antonio Street where the same vehicle had crashed. When he approached the vehicle, he found Perkins asleep behind the wheel. The constable then turned off the engine and removed the keys before calling the Austin Police Department.

When Perkins was booked in the Travis County Jail following the single-vehicle accident, a preliminary breath test resulted in a reading of .178, more than twice the legal limit. He admitted to consuming mixed vodka drinks.

Later Friday morning, Perkins was released from jail after posting a $40,000 bond.

Texas offensive line coach Matt Mattox announced plans last month for the senior to move to left guard. Prior to that, Perkins had started 24 games in his career, splitting his time between right guard and right tackle.

The Dallas Morning News ranked Perkins the area’s top prospect in 2013 while he was at Lake Highlands High School. At that time, he became the fourth offensive lineman to receive that honor since SportsDay started such rankings in 2002.

ESPN ranked Perkins sixth in the nation among offensive tackles his senior year of high school.

Besides Texas, he also received offers from LSU, Oklahoma and Texas A&M among several other universities.