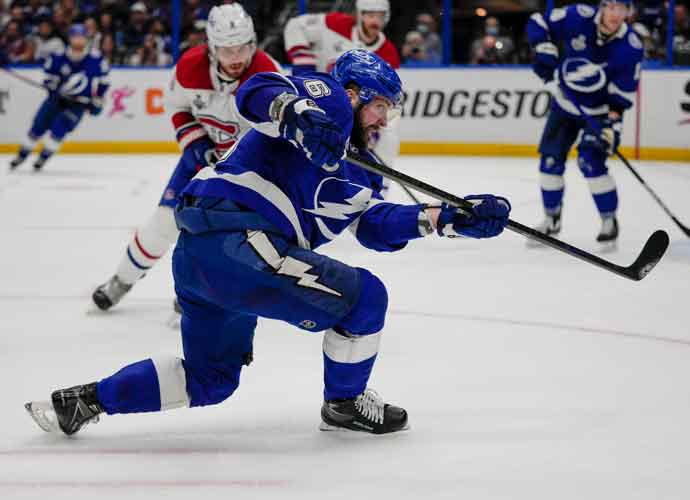 The Tampa Bay Lightning are off to a very strong start in their title defense, and it’s thanks to Nikita Kucherov. The Lightning star continued his spectacular postseason, recording two goals and an assist in a 5-1 win over the Montreal Canadiens in Game 1 of the Stanley Cup Final on Monday night. All of Kucherov’s points came in the third period, breaking the game open for Tampa Bay.

“That’s one of the best players in the world,” said Lightning captain Steven Stamkos, who was set up by Kucherov on the power play for Tampa Bay’s final goal. “He’s playing like a beast right now. He’s so, so good.”

While there were concerns over Kucherov’s health just last week, the star downplayed them the entire time,  going as far as saying, “There was no injury. I don’t know what you’re talking about.”

Head coach John Cooper even implied Kucherov might miss Game 7 against the Islanders last round, but thankfully he was able to suit up for the series finale against the Islanders, before dominating the Canadiens in Game 1 of the Stanley Cup. Cooper’s tone was different this week. “Guys are battling through injuries; it’s kind of an inspiration to others, and so it’s uplifting, watching what guys fight through, especially at this time of year,” he said. “And [Kucherov is] doing that and clearly he was rewarded for it tonight and in how he played and some of the results. It’s Finals time, and everybody’s playing banged up and fortunately for this group, why we probably had some success because everybody’s fighting through it.”

Kucherov has already reached 30 points in only 19 playoff games. The only player to reach that mark faster over the past 25 years was Pittsburgh Penguins center Evgeni Malkin in 2009. Kucherov is also running away with the playoff scoring race. The next closest player is teammate Brayden Point, who has 23 points. It has been all the more impressive since Kucherov spent the entire regular season sidelined as he rehabbed from a hip surgery in late December.

“It was tough mentally not being able to play, but that’s all in the past,” Kucherov said Monday. “I’m just really enjoying the moment and happy to be with the boys and just excited to play in the Final.”

Game 2 of the Stanley Cup Final is slated to be played in Tampa Bay on Wednesday night before the series shifts north of the border to Montreal.