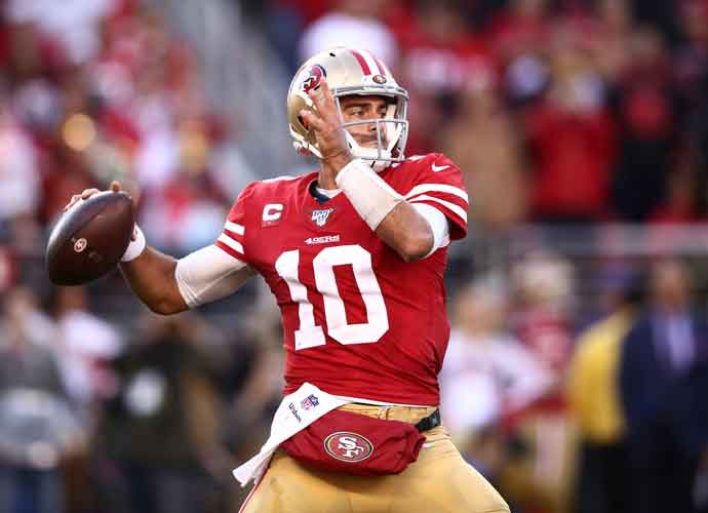 SANTA CLARA, CALIFORNIA - JANUARY 11: Jimmy Garoppolo #10 of the San Francisco 49ers attempts a pass against the Minnesota Vikings during the NFC Divisional Round Playoff game at Levi's Stadium on January 11, 2020 in Santa Clara, California

The Kansas City Chiefs walked away as champions of the AFC, while San Francisco took home the NFC crown. The Super Bowl LIV matchup in Miami is already re-selling in record fashion.

The current average resale price of a Super Bowl ticket is $6,002, with those on the lower end running for around $5,200. The best seats, however, are sitting right around $16,000.

The highest-priced Super Bowl ticket prior was Super Bowl LII when the New England Patriots took on the Philadelphia Eagles in Minneapolis. That price was around $5,373. Next was the Los Angeles Rams and Patriots bout in Super Bowl LIII where they hovered around $4,657.

Ticket prices do reflect venue, as Miami is a hot spot and will see some great entertainment as well. Shakira and Jennifer Lopez are set to tear down the stage as the two Hispanic pop icons seemed a perfect fit for the venue.

Demi Lovato announced she will be performing the national anthem for this Super Bowl.