Steve Nash Fired As Nets Coach – Who Will Replace Him? - uSports.org 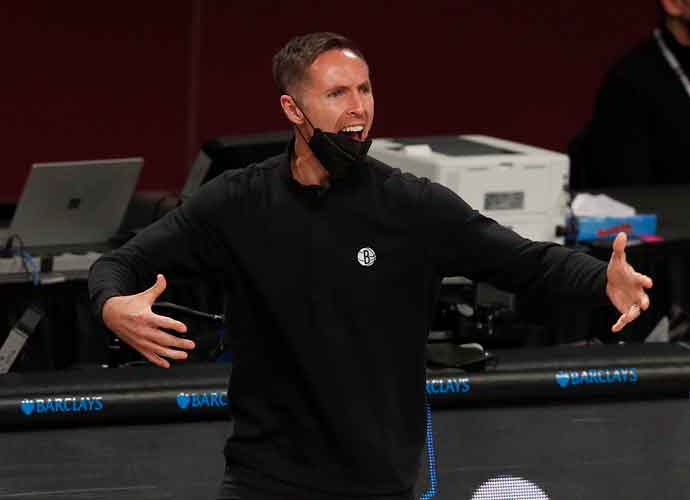 NEW YORK, NEW YORK - APRIL 05: Head coach Steve Nash of the Brooklyn Nets in action against the New York Knicks at Barclays Center on April 05, 2021 in New York City. The Nets defeated the Knicks 114-112. NOTE TO USER: User expressly acknowledges and agrees that, by downloading and or using this photograph, User is consenting to the terms and conditions of the Getty Images License Agreement. (Photo by Jim McIsaac/Getty Images)

The Brooklyn Nets have agreed to part ways with Steve Nash after a disappointing start to the season.

While there is no decision made yet on who will replace, the organization said it plans on making one in the “near future.”

“Since becoming head coach, Steve was faced with a number of unprecedented challenges, and we are sincerely grateful for his leadership, patience and humility throughout his tenure,” Nets general manager Sean Marks said in a statement.

“Personally, this was an immensely difficult decision; however, after much deliberation and evaluation of how the season has begun, we agreed that a change is necessary at this time.

In 2020, the Nets signed Nash to a four-year agreement to coach the team.

It was hoped that the Canadian Hall of Fame basketball point guard would help the team win a championship.

The best shot was in 2021 right after the Nets acquired James Harden – who joined the talents of Kyrie Irving and Kevin Durant.

But Irving and Harden suffered injuries during the playoff run and the Nets haven’t been the same since.

Now, the Nets find themselves with just a 2-5 hole to start the year and are making a change out of desperation.

Another issue for the Nets is the Irving dilemma.

He recently promoted a book that has been documented for containing misleading antisemitic information.

In addition, he’s had other off-the-court issues.

This includes his refusal to take the vaccine and miss home games, as well as staying out of the lineup due to “family and personal stuff.”

Meanwhile, Adrian Wojnarowski of ESPN reports that Boston Celtics head coach Ime Udoka, who has been suspended by the team is the most likely option to succeed Nash as the new Nets coach.

In fact, it’s could get done within the next two days, he said.

Suspended Celtics coach Ime Udoka has emerged as the likely next Brooklyn Nets head coach and his hiring could be finalized as soon as the next 24-to-48 hours, sources tell ESPN. Celtics will let him leave for another job.

The Celtics suspended Udoka for the entire season for allegedly making inappropriate comments toward a team staffer.

The team cited that he committed “violations of team policies.”

Nets assistant Jacque Vaughn will serve as the interim coach for tonight’s game against the Chicago Bulls.

Read more about:
Brooklyn Nets Steve Nash
Listen to the uInterview Podcast!
Get the most-revealing celebrity conversations with the uInterview podcast!