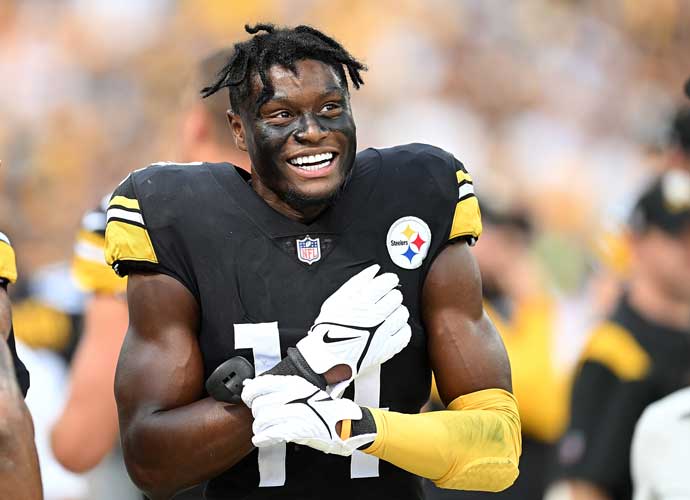 PITTSBURGH, PA - SEPTEMBER 18: George Pickens #14 of the Pittsburgh Steelers looks on during the game against the New England Patriots at Acrisure Stadium on September 18, 2022 in Pittsburgh, Pennsylvania. (Photo by Joe Sargent/Getty Images)

Pittsburgh Steelers wide receiver George Pickens came up with a spectacular catch on Thursday Night Football – and it’s being compared to a famous play.

In the first quarter, when the Steelers were trailing 7-0, quarterback Mitch Trubisky was scrambling out of the pocket to his right.

He wound up throwing it down the sideline to a place where only Pickens could catch it despite there being solid coverage by the Cleveland Browns.

What was most impressive about the catch is Pickens’ concentration on the ball as his body was pointed in a different direction.

The 2022 second-round pick secured the ball against his body after sticking out one hand and hitting the ground hard.

You can take a look at it yourself – but already it’s in the conversation for the catch of the year.

Are you serious, George Pickens? What a one-handed grab!#PITvsCLE on Prime Video
Also available on NFL+ https://t.co/uF4okqrMww pic.twitter.com/4mDGzOOoZu

In fact, Odell Beckham Jr., who arguably had the most famous one-handed catch of all time by using just two fingers, praised Pickens’ acrobatics.

THIS CATCH IS FILTHY

Some even thought Pickens’ catch last night was better.

This is better than Odell’s catch pic.twitter.com/Lc4Ye1bFGd

Wasn’t ready to say it was better than Odell’s till I saw this angle. Odell’s<
pic.twitter.com/CjwGfpYjwl

But others don’t think there was any competition and Beckham Jr.’s was clearly more impressive.

When Odell did it, it felt like the world stopped for a moment https://t.co/5RbZriePxb

Naw odell caught his with 2 and a half fingers and was getting held https://t.co/U8OrzFPXId

The Pickens play led to running back Najee Harris finishing the drive off with a five-yard rushing touchdown to tie the game up at seven a piece.

Unfortunately for the Steelers, it didn’t win up winning.

On the year, the team is 1-2, sitting in third place in the AFC North after falling to the division rival Browns.

But the Steelers at the very least have to be encouraged by the upside of Pickens.

He has five catches for 65 yards so far in his rookie campaign.

Meanwhile, some Steelers fans have already had enough of watching Trubisky play and want to see what 2022 first-round pick quarterback Kenny Picket can do instead.

The Steelers will face the New York Jets in week four.