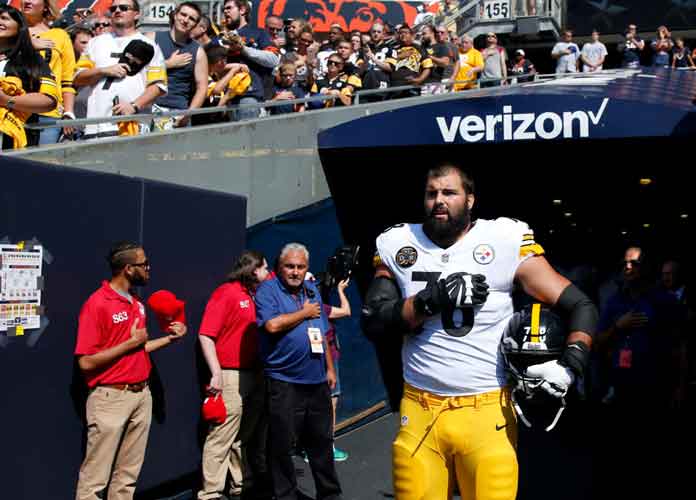 CHICAGO, IL - SEPTEMBER 24: Alejandro Villanueva #78 of the Pittsburgh Steelers stands by himself in the tunnel for the national anthem prior to the game against the Chicago Bears at Soldier Field on September 24, 2017 in Chicago, Illinois.

For their week one Monday Night Football game against the New York Giants, the Pittsburgh Steelers wore the name Antwon Rose Jr., a black teenager killed by Pittsburgh police in 2018, on the back of their helmets. Every player participated in this except offensive lineman Al Villanueva who chose to have the name Alwyn Cashe, an Army Sgt. 1st class who was killed on duty in Iraq. Villanueva is a former Army Ranger who has served overseas.

This change apparently came as a surprise to Villanueva’s teammates. “I was surprised by what Al did,” defensive captain Cam Heyward said Wednesday. “You’ll have to talk to him in the future, but in this country, we’re given the freedom to do and support those that mean a lot to us.”

While it came as a surprise it seems that Villanueva’s teammates and coaches supported his decision with the main message, but Rose Jr.’s mother was clearly upset in a Facebook post.

“Let me very very very clear,” she wrote on Facebook. “The Pittsburgh Steelers took a team vote. Obviously, one person didn’t like the results so they chose to do something different. I have nothing against vets and absolutely appreciate everything that they have done and continue to do for us. But this one person showed us exactly who he is and obviously he didn’t approve of how the vote turned out. In my opinion; that’s for his coach, team and organization to address NOT ME! While he was so busy being negative what it actually did now forced more people to engage in this conversation. I’m going to use this negative press and negativity to motivate me to hold the Pittsburgh Steelers even more accountable!!! Yes I believe in second chances but as we all know I believe in putting in the work and that’s how I base my collaborations. They came to me as a team/organization and I don’t care how good of an individual you are; if you are not a TEAM player then maybe you are playing for the wrong team!!!”

Steelers coach Mike Tomlin continued to support his player’s decision. “He did discuss that with me,” Tomlin said Tuesday. “And this is in line with everything we said about participating in elements of social justice this offseason. As an organization and myself as a head coach of an organization, we are going to support our players in however they choose to participate and express themselves or to not participate or not express themselves. As long as they do so thoughtfully and with class.”