Stan Wawrinka Calls Out Nick Kyrgios For Statements About His GirlFriend - uSports.org 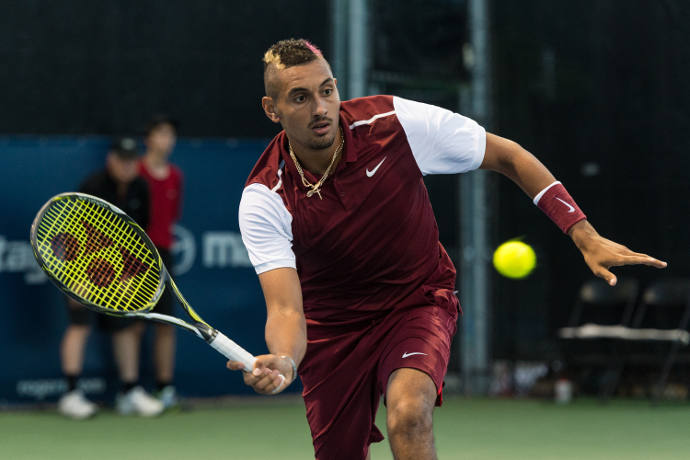 Caption:MONTREAL, ON - AUGUST 11: Nick Kyrgios of Australia hits a return against Gael Monfils and teammate Jo-Wilfried Tsonga of France during day two of the Rogers Cup at Uniprix Stadium on August 11, 2015 in Montreal, Quebec, Canada. (Photo by Minas Panagiotakis/Getty Images)

Stan Wawrinka Calls Out Nick Kyrgios For Statements About His GirlFriend

Athletes are divas, especially when you involve their significant others. Recently, Stan Wawrinka, the French Open champion, wants tennis authorities to take action of Nick Kyrgios after making comments about his girlfriend at a Montreal Tournament. With the addition of on-court microphones, it was picked up that Kyrgios was making the verbal attacks,  but he later responds by saying that Wawrinka had been making comments to him as well.

As a response to the verbal altercation, Wawrinka turned to twitter to show his feelings on the situation. He said,

“There is no need for this kind of behaviour on or off the court and I hope the governing body of this sport does not stand for this and stands up for the integrity of this sport that we have worked so hard to build.”

“So disappointing to see a fellow athlete and colleague be so disrespectful in a way I could never even imagine.”

“What was said I wouldn`t say to my worst enemy. To stoop so low is not only unacceptable but also beyond belief”

What everyone wants to know, however, is what he actually said, which has not yet surfaced.

What is known, though, is that the comments were made after the first set Kyrgios played where he won 7-6. After winning the next set 6-4, Wawrinka withdrew from the third set losing 4-0.

In the past Kyrgios has been the focus of much criticism due to his poor court behavior, but he attributes it more to competition and living in the moment.

When asked about why he made the comments that he did, he responded, “He [Wawrinka] was getting a bit lippy with me. Kind of in the heat of the moment, I don`t know, I just said it.”

And in Twitter fashion, Wawrinka`s coach Magnus Norman, took to the interwebs and said, “That was really really low Nick Kyrgios. Hope for u that u have people around that will teach u a thing or 2 about life tonight. Very bad??”