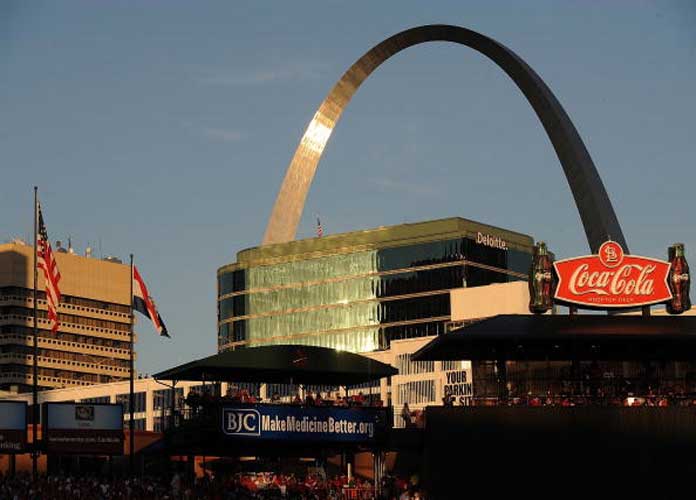 ST. LOUIS - OCTOBER 10: An interior view of Busch Stadium and the St. Louis Gateway Arch during Game Three of the NLDS during the 2009 MLB Playoffs between the St. Louis Cardinals and the Los Angeles Dodgers on October 10, 2009 in St. Louis, Missouri. (Photo by Ronald Martinez/Getty Images)

The group, SC STL, includes former Anheuser-Busch President Dave Peacock and other members of a group known as MLS2STL that began efforts in January to bring professional soccer to St. Louis. The group, led by chairman Paul Edgerley, also plans to acquire St. Louis FC, which plays in USL.

St. Louis became one of the top contenders to join MLS in January when the NFL’s Rams moved back to Los Angeles.

Commissioner Don Garber, who has outlined a plan to expand the league to 28 teams, visited the city last year and stated in April that the league believes St. Louis is “MLS-ready” and could play as early as 2020.

In Thursday’s announcement, Garber said: “With its rich soccer heritage, St. Louis has always been a market of great interest to Major League Soccer and SC STL is the ideal ownership group that will provide St. Louis the best opportunity for a future expansion team.”

As for the stadium, private investors would reportedly cover at least 60 percent of the costs, and the facility would be owned by the city of St. Louis, said Jim Kavanaugh, vice chairman of the ownership group and founder of the minor league soccer club St. Louis FC.

The public would then be asked to pay for the remainder ($80 million) for the 20,000-seat stadium, not including a potential land purchase west of Union Station. The group said it will cover the league’s expansion fee, which is expected to be somewhere between $125-$135 million.

The stadium would sit on 30 acres of land owned by the Missouri Department of Transportation, north of Highway 40 (Interstate 64) near 22nd Street and just west of Union Station. In September, the city of St. Louis entered a deal with the state for a two-year option to potentially buy the site, although an appraisal is still in the works.

Mayor Francis Slay said in a statement that “this is a moment St. Louis has to seize.”

“I cannot imagine a better stadium setting anywhere in MLS than the one we envision west of Union Station, and I am very appreciative that Commissioner Garber and his staff are willing to work with me and our ownership group to make it happen,” Slay said.

ST. LOUIS – OCTOBER 10: An interior view of Busch Stadium and the St. Louis Gateway Arch during Game Three of the NLDS during the 2009 MLB Playoffs between the St. Louis Cardinals and the Los Angeles Dodgers on October 10, 2009 in St. Louis, Missouri. (Photo by Ronald Martinez/Getty Images)

Read more about:
expansion MLS Soccer St. Louis stadium
Listen to the uInterview Podcast!
Get the most-revealing celebrity conversations with the uInterview podcast!