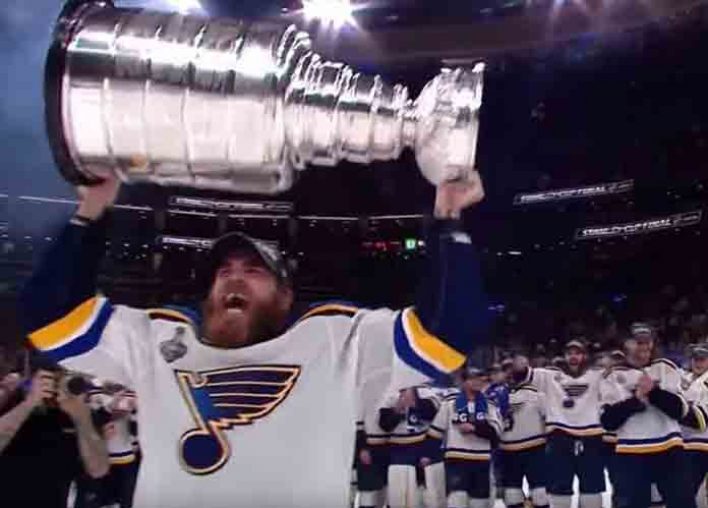 An unstoppable force met an immovable object in Game 7. Rookie goalie Jordan Binnington for the St. Louis Blues was rooted in the net for 60 minutes, helping the Blues lift their first Stanley Cup in franchise history after a 4-1 win.

The Boston Bruins had 12 chances on net in the first and were denied by Binnington. The Bruins then had nine shots on goal in the second, and again Binnington rejected them. He didn’t give up a goal until less than five minutes were left in the final period, but the Blues were already up 4-0 and on their way to celebrating after capitalizing on stellar defense.

The MOMENT of the 2019 #StanleyCup Final. A Binnington save that stops 2-1 and eventually leads to 3-0. pic.twitter.com/wDXxw598Wq

The Bruins were backed by an electric crowd at the TD Garden during the first, as fans were pushing them on after multiple first-period chances. The Blues’ transition defense was pitch-perfect, parking the bus in front of their goal. When the Blues saw their chances, they exploited the Bruins defense. Ryan O’Reilly made history scoring first for the Blues, followed by a one-two punch, with the Blues scoring with just under 10 seconds left in the first thanks to captain Alex Pietrangelo.

It was all St. Louis after that, with the team holding their own and making their limited chances count. For the first time in the team’s 52-year franchise, the cup is going home to St. Louis.

“We’ve been waiting for this for so many freaking years, and to be from St. Louis and put this sweater on every night, holy cow,” said Blues’ Patrick Maroon, according to New York Times. “We brought it home.”

The Bruins gave it their all, including the Bruins’ iconic captain Zdeno Chara, who lifted the team’s spirits after playing through the rest of the series with a broken jaw he suffered in Game 4.

“It’s hard to find words,” Chara said, according to USA Today. “It’s not easy. I’m sure everyone pictured it differently and we believed that it was there for us. That’s sports. You’ve got to kind of take those and move on.”

The Blues denied the Bruins their seventh Stanley Cup and refused to let the city of Boston have their 12th championship parade since 2002. This one is going to Missouri.