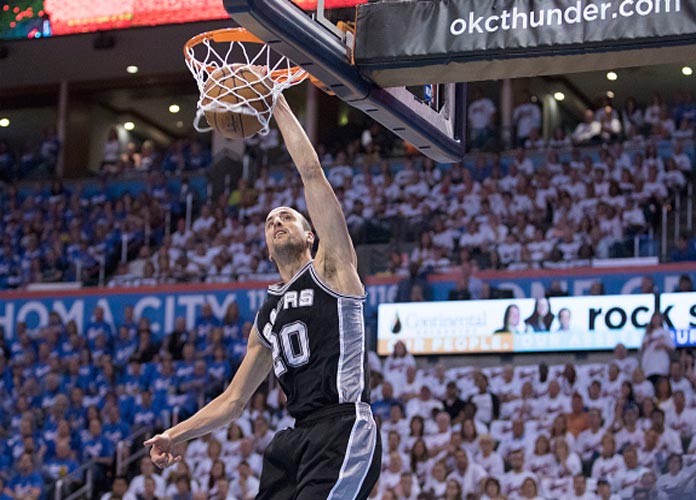 OKLAHOMA CITY, OK - MAY 6: Manu Ginobili #20 of the San Antonio Spurs dunks two points against the Oklahoma City Thunder during the first half of Game Three of the Western Conference Semifinals during the 2016 NBA Playoffs at the Chesapeake Energy Arena on May 6, 2016 in Oklahoma City, Oklahoma.

Manu Ginobili Retires From NBA At 41

The 41-year-old Argentine guard revealed the new on Twitter: “IMMENSE GRATITUDE to everyone (family, friends, teammates, coaches, staff, fans) involved in my life in the last 23 years,” Ginobili wrote. “It’s been a fabulous journey. Way beyond my wildest dreams.”

Today, with a wide range of feelings, I’m announcing my retirement from basketball. IMMENSE GRATITUDE to everyone (family, friends, teammates, coaches, staff, fans) involved in my life in the last 23 years. It’s been a fabulous journey. Way beyond my wildest dreams. pic.twitter.com/3MLCUtmd6K

Ginobili played his entire NBA career with the Spurs, and is the franchise’s all-time leader in steals. Before arriving in San Antonio, he played seven years in basketball leagues in Argentina and Italy.

The two-time All-Star is the third Spur to leave the team this year. Last month, fellow veteran Tony Parker — who came to San Antonio in 2001, just one year before Ginobili — signed with the Charlotte Hornets in free agency, while star forward Kawhi Leonard was traded to the Toronto Raptors for DeMar DeRozan.

The Spurs also lost two-time MVP and 15-time All-Star center Tim Duncan in 2016 after a 19-year career. Ginobili, Parker, Leonard and Duncan all helped lead San Antonio to an NBA title in 2014 under Gregg Popovich, who has coached the squad for 22 full seasons. The team has not won a national championship since then, which suggests the Spurs may need to rebuild their roster in oder to ensure their best days aren’t behind them.

Known for his aggressive playing style, Ginobili also won the NBA Sixth Man of the Year Award in 2008. It thus seems like the Argentine has more than enough accomplishments under his belt to merit becoming a Hall of Famer, something many NBA figures, pundits and fans are already predicting. Leading the franchise in steals alone already seems like a solid enough reason.

Here are some of the top reactions and tributes to the Argentine star from around the NBA:

I competed against you for 9 years. I sat through countless pregame meetings discussing how not to let you go to your left hand because when you do, you’re impossible to stop! Then, I became your teammate and got to witness first hand how you bring way more value to a team than pic.twitter.com/JJYbvXNToE

One of the all time greats. Fearless, funny, compassionate and competitive as hell. Thank you Manu! https://t.co/eZ61cWRvGb

What a player @manuginobili! A pleasure to compete against you and enjoy your greatness. Congrats!

Wow got to play with one of my favorite players in his last season. Thanks for all you did for the game gramps @manuginobili

Big thanks @manuginobili for pouring your heart into the game and inspiring generations!! Cold blooded southpaw! #madeunorthodoxcool

@manuginobili , you were the main person I looked at when deciding I was gonna be a 6th man for good. Your style, talent, competitiveness, and will to win will be truly missed. Nothing but respect! #best6thman pic.twitter.com/gHsjX9yPvY