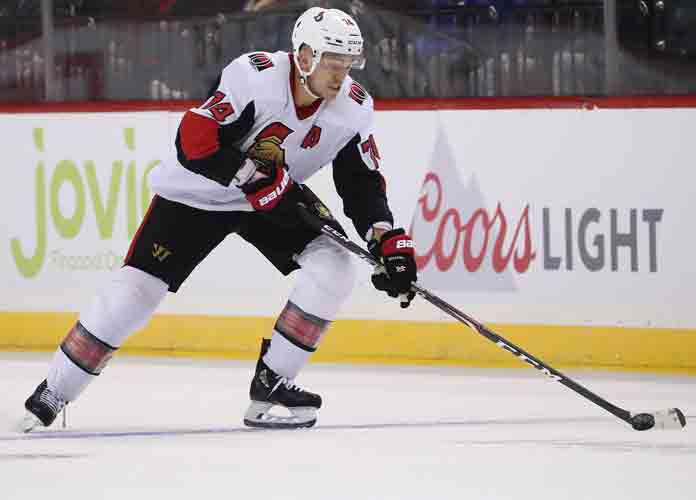 NEW YORK, NEW YORK - NOVEMBER 05: Mark Borowiecki #74 of the Ottawa Senators skates against the New York Islanders during their game at Barclays Center on November 05, 2019 in New York City.

The Ottawa Senators have their own superhero in defenseman Mark Borowiecki. The alternate captain managed to stop a theft on December 1 ahead of the Senators game against the Vancouver Canucks.

He witnessed someone break into a parked vehicle in an area of Vancouver and then take off with a bag on a bicycle. Borowiecki stopped the man by clotheslining him, where he then wrestled the man to the ground and took back the stolen bag. Police are still on the lookout for the thief.

Twitter became full of compliments and praise for the Senators leader as people sought to express how amazing a player he is. Before Tuesday night’s game, Borowiecki joked, “I’m a mediocre fighter on the ice, but I’m very confident handling myself off the ice.”

He received a text of gratitude from the owner of the car who was surprised to learn he was an Ottawa Senators player. According to Borowiecki, she said, “I’m actually a huge Leafs fan”, in reference to the Toronto Maple Leafs.

From 2011-2013, Borowiecki spent time bouncing back and forth from the Ottawa Senators and the Binghamton Senators, the AHL affiliate team to Ottawa. Since 2013, he has played for the Ottawa Senators as a powerhouse defenseman and alternate captain and has earned the nickname “Boro Cop” for his physical play.

“Boro Cop” decided to take his physical style of play to the streets to fight crime and one lucky woman is thankful for this NHL superhero as there are smiles all around.

With all the sad stories coming out of the NHL with coaches abusing their players. There are still great people like Mark Borowiecki inside the game. His involvement with veterans, intellectually disabled kids and now stopping robberies speaks to his character. https://t.co/hmIMvf1p4E

MARK BOROWIECKI IS THE MODERN DAY SUPERMAN AND I DONT WANT TO HEAR OTHERWISE pic.twitter.com/gcXBChL3GR