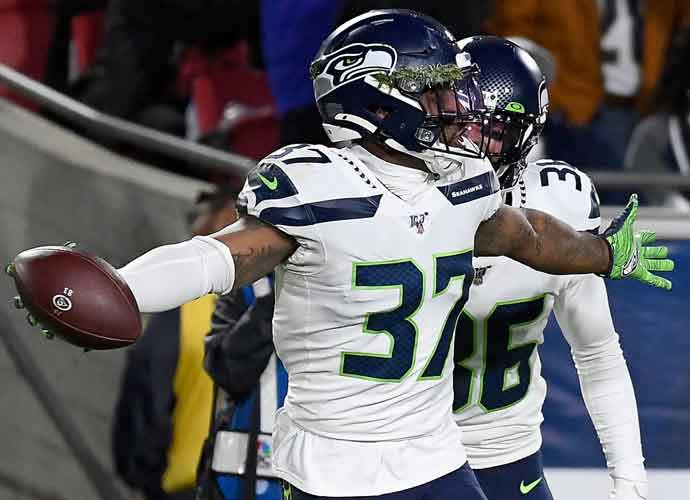 LOS ANGELES, CALIFORNIA - DECEMBER 08: Defensive back Quandre Diggs #37 of the Seattle Seahawks celebrates after intercepting a pass in the third quarter of the game against the Los Angeles Rams at Los Angeles Memorial Coliseum on December 08, 2019 in Los Angeles, California.

Seattle had their five-game winning streak snapped on Sunday by the Rams in Los Angeles by the score of 28-12.

Newly acquired safety Quandre Diggs played well in his third game with Seattle intercepting Jared Goff twice in the game including a pick six return for 55 yards. Diggs was surprisingly traded by Detroit for a fifth round pick four weeks ago. He had just signed a three-year extension and was one of the team’s captains.

Running back Rashad Penny left the game on Seattle’s first drive and was later diagnosed with a sprained ACL. “We don’t know how serious it is, but it’s significant,” Carroll told ESPN.

Penny had just caught a screen pass from Russell Wilson for 16 yards before getting tripped up. Penny is usually second string behind Chris Carson, but his usage rate has picked up the last couple of games rivaling Carson in snaps over the last two games, 65-70. He had a career-high in yards with 129 and a touchdown against Philadelphia two weeks ago and followed that up with two touchdowns last week against Minnesota. Carrying the ball 14 and 15 times in those match-ups were both career highs.

“Well obviously it’s disappointing losing Penny. I feel for him. He’s such a great competitor. He’s been tremendous the past several weeks, so that’s just unfortunate. It’s part of the game unfortunately. I got to talk to him afterward and he had his head up, he’s looking forward to where he’s going next and just fighting through the rehab of it all and we’ll be right there with him, but yeah, it was tough when you lose one of your key players — a guy that you love to play with like Penny. He’s been playing good football, too, for us, but Chris did well tonight. He made some key runs. Made some nice plays, some nice catches and stuff like that, so I thought Chris played well,” Wilson told ESPN.

Penny was a first round draft pick by the Seahawks in 2018, but his playing time was limited behind Carson who just surpassed 1,000 yards rushing in last night’s game. This makes Carson the first Seahawks running back since Marshawn Lynch to rush for over 1,000 yards in back-to-back seasons.

“To be honest, I wasn’t even thinking about it. A couple players came up and congratulated me, but on a night like this, you lose one of your close friends, you don’t get the win, I don’t really pay too much [notice],” said Carson.

Seattle is 10-3 and one game below the NFC West leaders, San Francisco.