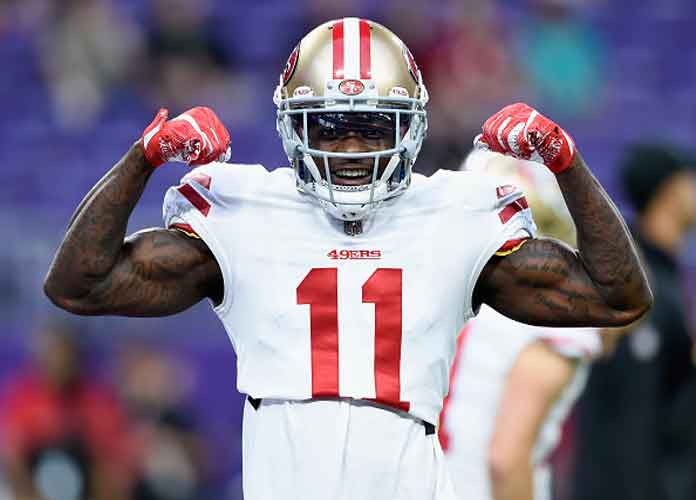 MINNEAPOLIS, MN - AUGUST 27: Marquise Goodwin #11 of the San Francisco 49ers poses for photo during warmups before the preseason game against the Minnesota Vikings on August 27, 2017 at U.S. Bank Stadium in Minneapolis, Minnesota. (Photo by Hannah Foslien/Getty Images)

Just hours before scoring his first touchdown of the season in Sunday’s 31-21 victory over the New York Giants, the San Francisco 49ers wide receiver lost his newborn son due to complications during his wife Morgan’s pregnancy.

“Unfortunately we lost our baby boy due to some complications, and had to prematurely deliver him early this morning around 4am,” Goodwin wrote in an Instagram post.

I just wanna thank those who’ve genuinely prayed for @morganakamomo & myself through out this pregnancy. Unfortunately we lost our baby boy due to some complications, and had to prematurely deliver him early this morning around 4am. Although we are hurt, I am grateful for the experience and grateful that God blessed me with a wife as courageous and resilient as Morgan. The pain (physically, mentally, & emotionally) that she has endured is unbelievable. Please Pray for the Goodwin family. 💙👣

After catching an 83-yard touchdown pass from rookie quarterback C.J. Beathard in the second quarter of the team’s first win of the season, Goodwin blew a kiss to the sky and then dropped to his knees in prayer while teammates surrounded him.

“Honest to God truth, the only reason I made it through the game is because of my faith in God,” Goodwin said Tuesday. “I mentally and physically was not prepared to play in the game — at all. I really didn’t even practice that week, I was just going through a lot. Just trying to get my body rested from the week before and the week before that. Coming into the game, I wasn’t really in it because I had just lost my baby. My wife, we prayed about it and I guess she felt that God moved her to allow me to go play and she encouraged me. She raised my spirits up and helped me get ready for the game.

Morgan had reportedly encouraged her husband to play last Sunday. She told People magazine that the couple — who married in February 2016 — had decided to name their son Marquise Jr.

“We cried. It was a hard thing to take in,” she said. “This hurts because I was 19 weeks, I was almost halfway there.”

According to Matt Maiocco to NBC Sports Bay Area, Goodwin — who will be 27 on Sunday — left the locker room quickly after the game to join his family at home in Texas.

The 49ers (1-9) are off this week for their bye, and then host the Seattle Seahawks after Thanksgiving on Nov. 26.

MINNEAPOLIS, MN – AUGUST 27: Marquise Goodwin #11 of the San Francisco 49ers poses for photo during warmups before the preseason game against the Minnesota Vikings on August 27, 2017 at U.S. Bank Stadium in Minneapolis, Minnesota. (Photo by Hannah Foslien/Getty Images)