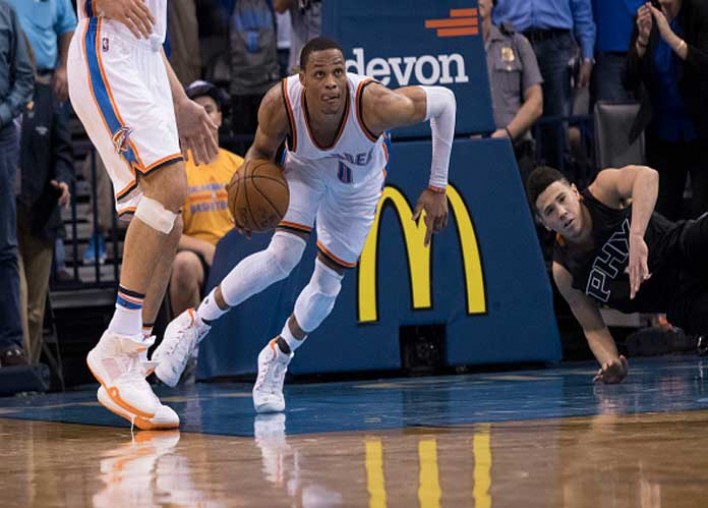 OKLAHOMA CITY, OK - OCTOBER 28: Russell Westbrook #0 of the Oklahoma City Thunder watches the time clock as he looks for a play against the Phoenix Suns during the overtime period of a NBA game at the Chesapeake Energy Arena on October 28, 2016 in Oklahoma City, Oklahoma. The Thunder won 113-110.

Russell Westbrook scored 30 points, including a huge left-handed hammer dunk over Clint Capela in the final seconds to lead the Oklahoma City Thunder to a 105-103 home victory over the Houston Rockets Wednesday night.

The Thunder led by three when Westbrook sank the dunk with 5.5 seconds remaining to bump their lead to five.

The towering point guard said Capela’s reputation as one of the NBA’s leaders didn’t deter him.

”It don’t matter, man,” Westbrook said. ”Game on the line. If you get blocked, or you make a dunk – it’s one or the other. Fortunately, it went in and it closed the game for us.”

”Just happy it’s not me,” he said. ”That’s pretty much like the only thing is `Thank goodness he’s on my team.’ That was crazy. Honestly, he did a good job, Capela. Nice little bit of defense, honestly. Verticality, avoided the foul, and obviously, he’s (Westbrook) just a really athletic dude. Just caught him.”

James Harden, the league’s assist leader and No. 4 scorer, finished with 13 points, 13 assists and seven rebounds. Capela added 13 points and 14 rebounds for the Rockets, who went scoreless for more than six minutes in the fourth quarter to help their opponents win.

”We didn’t play well,” Harden said. ”We didn’t shoot the ball well, and we still had an opportunity to win.”

The Thunder led 65-63 at halftime, and shot 61 percent before the break. Houston started strong after the break, however, and a 14-5 run put them up 77-70 and led to an Oklahoma City timeout. The Rockets extended their lead to 11, although the Thunder pulled to 90-85 by the end of the third.

Oladipo’s 3-pointer with just under three minutes left tied the score at 100, then Andre Roberson’s alley-oop dunk on a lob from Westbrook put the Thunder ahead for good.

Westbrook then made a free-throw to extend Oklahoma City’s lead to three with 28 seconds remaining, and then threw down the game-winning dunk.

”I still wasn’t able to make a couple of passes,” Harden said. ”Normal game, just didn’t make shots, especially down the stretch when we needed to. That was it.”

The Rockets next host the Portland Trail Blazers on Thursday night, while the Thunder host the Brooklyn Nets on Friday night.

OKLAHOMA CITY, OK – OCTOBER 28: Russell Westbrook #0 of the Oklahoma City Thunder watches the time clock as he looks for a play against the Phoenix Suns during the overtime period of a NBA game at the Chesapeake Energy Arena on October 28, 2016 in Oklahoma City, Oklahoma. The Thunder won 113-110.