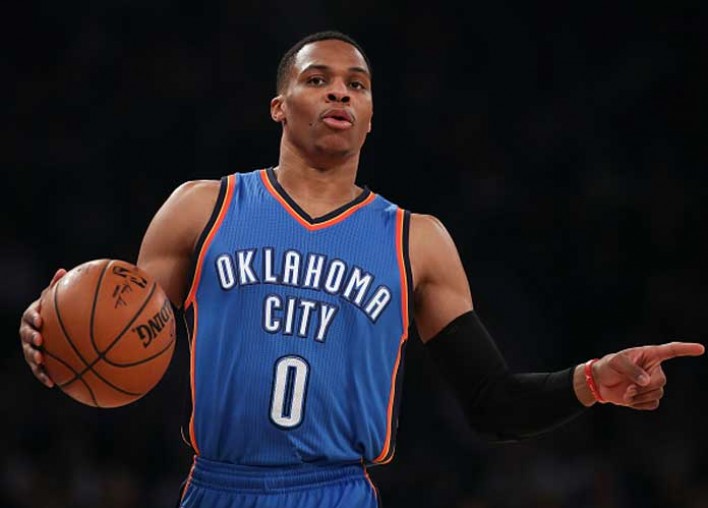 Rusell Wesbrook stretched his triple-double streak to four games on Wednesday night with a 35-point, 14-rebound, 11-assist performance in a 126-115 overtime home victory over the Washington Wizards.

Westbrook scored 14 of his 35 points in overtime.

”Never stop believing in yourself and your capabilities of doing what you’re able to do on the basketball floor,” Westbrook said.

Bradley Beal, who led the Wizards with 31 points, couldn’t believe Westbrook hit a 3-pointer with 8.5 seconds remaining in regulation to force overtime. It was the only 3-pointer he made in six attempts.

”I felt like I did a great job of cutting him off to the basket,” Beal said. ”He wasn’t making any jumpers all game. The only 3 he makes is the one to go into overtime.”

Westbrook was 4 of 6 from the field and 6 for 6 on free throws in the extra period.

Former Thunder coach Scott Brooks returned as Washington’s coach, and the Oklahoma City crowd greeted him warmly. Brooks coached the Thunder for seven years and led them to the Western Conference Finals three times and the NBA Finals once.

”I’m humbled that they did that for me, and I appreciate it,” Brooks said. ”I’m glad they came out and supported their team and showed kind of what we did throughout the years.”

John Wall had 15 points and 15 assists, and Marcin Gortat added 12 points and 11 rebounds for the Wizards, who entered Wednesday’s game having won three of their previous four.

Oklahoma City led by 15 early in the second quarter, and were up 60-53 at halftime. A block by Domantas Sabonis led to a fast-break dunk by Steven Adams that put the Thunder up 74-62 in the third and prompted Brooks to call a timeout. Washington then tied the score at 84 heading into the fourth.

A 3-pointer and a dunk by Victor Oladipo trimmed the Wizards’ lead to one, and the assist on the dunk gave Westbrook his triple-double. Oladipo finished with 25 points.

Washington’s Otto Porter missed a short fadeaway at the end of regulation that would have decided the game, but then Westbrook took control.

”I thought we did a good job until overtime on Westbrook,” Brooks said. ”He’s hard to stop. He’s a terrific basketball player playing at a high level – another triple-double – but I thought we did a pretty good job of containing him most of the night.”

The Wizards next visit the San Antonio Spurs on Friday, while the Thunder will host the New Orleans Pelicans on Sunday.

NEW YORK, NY – NOVEMBER 28: Russell Westbrook #0 of the Oklahoma City Thunder dribbles up court against the New York Knicks during the first half at Madison Square Garden on November 28, 2016 in New York City.